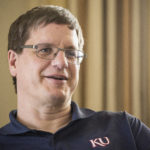 Topeka ? A former tech executive who grew up in Lawrence and currently works at the University of Kansas says he has filed to run for Kansas secretary of state in 2018.

Brian McClendon, 53, filed paperwork Monday to name a campaign treasurer to run as a Democrat for secretary of state in the 2018 election.

“When I came back to Kansas, a lot of people told me voter registration was a challenge here, and so in spending some time looking at the problem, that was very true,” McClendon said in an interview. “There are challenges in the area. And I got inspired because I realized the secretary of state’s office is actually responsible for making voter registration easier and getting more civic engagement, and that’s not happening right now.”

A native of Lawrence, McClendon has served as a vice president of Google and Uber, and he developed the software that eventually became Google Earth. He moved back to Lawrence after leaving Uber in March 2017 and joined KU as a research professor in electrical engineering and computer science.

He is a 1986 graduate of the University of Kansas where he earned a bachelor’s degree in electrical engineering.

He became the second major Democratic candidate in the race, and will face Sen. Marci Francisco, D-Lawrence, in a Democratic primary. Lucy Steyer, a 17-year-old high school student from Lenexa, has also filed paperwork to get into the race, taking advantage of Kansas’ lack of an age requirement to run for statewide office.

Francisco said in an interview that she welcomed McClendon into the race.

“It is an important position, so the more discussion we can have about what the office is doing, and should be doing, can only be helpful to Kansans,” she said. “I think we come with very different skill sets. So we’re offering, I think, a good choice to the party.”

McClendon said he wants to bring his background in technology to all aspects of the secretary of state’s office, from corporate business filings to elections. But it’s in the area of elections where he said he has the most concerns, particularly the current law requiring people to show proof of U.S. citizenship in order to register to vote.

That law was championed in 2011 by incumbent Secretary of State Kris Kobach, a Republican who is running for governor this year.

“I think that only citizens should vote, but a lot of states are able to check for citizenship using their own systems,” McClendon said. “So a technological solution would make voter registration much easier because it wouldn’t put the onus on the citizen to go find their birth certificate, sometimes in other states, which costs a lot of money and delays the completion. Other states don’t have this problem.”

In a separate interview Monday, Esau said he wasn’t concerned about McClendon’s entry into the race, despite his perceived ability to largely self-fund his own campaign.