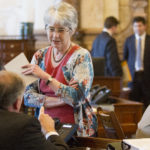 In this file photo from June 2015, Sen. Marci Francisco, D-Lawrence, right, discusses tax issues on the floor of the Kansas Senate.

State Sen. Marci Francisco, D-Lawrence, has officially entered the race for Kansas secretary of state — with the goal of restoring “integrity” to the office that has become so controversial under Secretary of State Kris Kobach.

After publicly discussing an interest in the office earlier this fall, the longtime Lawrence resident officially threw her hat into the ring Thursday by announcing the appointment of a campaign treasurer.

“After seven years of an administration that has put politics above service, raised incompetency in government to new levels, and worked to undermine free and fair elections, it’s time to restore Kansas values and common sense to the Secretary of State’s office,” Francisco said in a statement. “I believe the job of the Secretary is to serve the state’s voters and businesses. Every citizen has the right to vote; every business should receive quality service. Integrity, honesty, and service should be the principles of that office.”

The current secretary, Kobach, is seeking the Republican nomination for governor in 2018, leaving his office an open contest. Francisco’s Senate seat isn’t up for re-election until 2020, meaning she’ll be able to run for secretary of state without risking her spot in the Legislature.

In an interview with the Journal-World Friday, Francisco said she chose to enter the race out of “concerns” with Kobach, among them worries that voters’ personal information in Kansas’ multistate Crosscheck voter registration program may be vulnerable to cyberattacks.

Francisco also said she and her colleagues were “assured” by Kobach when he proposed legislation requiring proof of citizenship in registering to vote that there would be a “seamless connection” between voter registrations at the Department of Motor Vehicles and the secretary of state’s office.

That bill, the “Secure Fair Elections Act,” was passed in spring 2011.

“We’ve now had years to implement this connection,” Francisco said. ” … We have this opportunity to make that happen, and yet the secretary of state’s office has not made that a priority or found a way to implement it yet.”

Francisco also said she was disappointed by the secretary of state’s efforts in educating Kansans about a 2015 law that shifted local elections from spring to fall. But she applauded the work of Douglas and Jefferson county clerks in informing voters about the calendar change via mailers, which in Douglas County reportedly sparked a huge bump in advance voting earlier this fall.

She’d like to see similar efforts carried out across Kansas.

“That really helped everyone in Douglas County understand when this election was happening, because we all got something in the mail,” Francisco said. “That didn’t happen across the state. Especially when you’re making such a change in what people can expect, it would be good to have the opportunity to sign up in advance to let people know.”

First elected to the Kansas Senate in 2004, Francisco represents the state’s 2nd District. Her most recent re-election was in 2016. Francisco, a University of Kansas alumna, also served on the Lawrence City Commission from 1979 to 1983 and as a two-term mayor from 1981 to 1983.