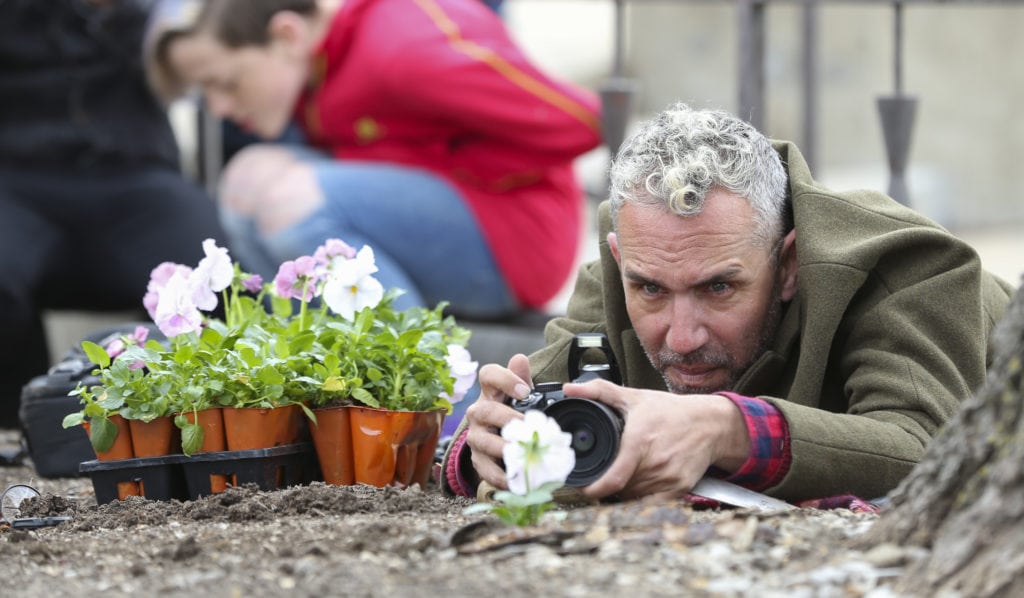 British artist Paul Harfleet photographs a pansy that he planted just north of the Spencer Museum of Art on the campus of the University of Kansas, Friday, April 6, 2018. Harfleet, who is the creator of the Pansy Project, planted several pansies in various spots on the KU campus associated with homophobic abuse or homophobic incidents.

There’s a single pansy planted atop the steps near the Campanile. A few yards away, along Memorial Drive, there’s another one. The bright-faced, happy little flowers now adorn several spots around the University of Kansas campus.

To passersby, the lone pansies may seem like cheerful reminders of spring. But in this context, the blossoms also serve as a reminder of homophobic abuse. They were planted just last week by British artist Paul Harfleet as part of his ongoing international art installation “The Pansy Project,” which marks sites of homophobic abuse with flowers.

Since 2005, Harfleet has been planting single pansies at these sites, photographing each flower, naming the image after the abuse that occurred and then posting it to his website. 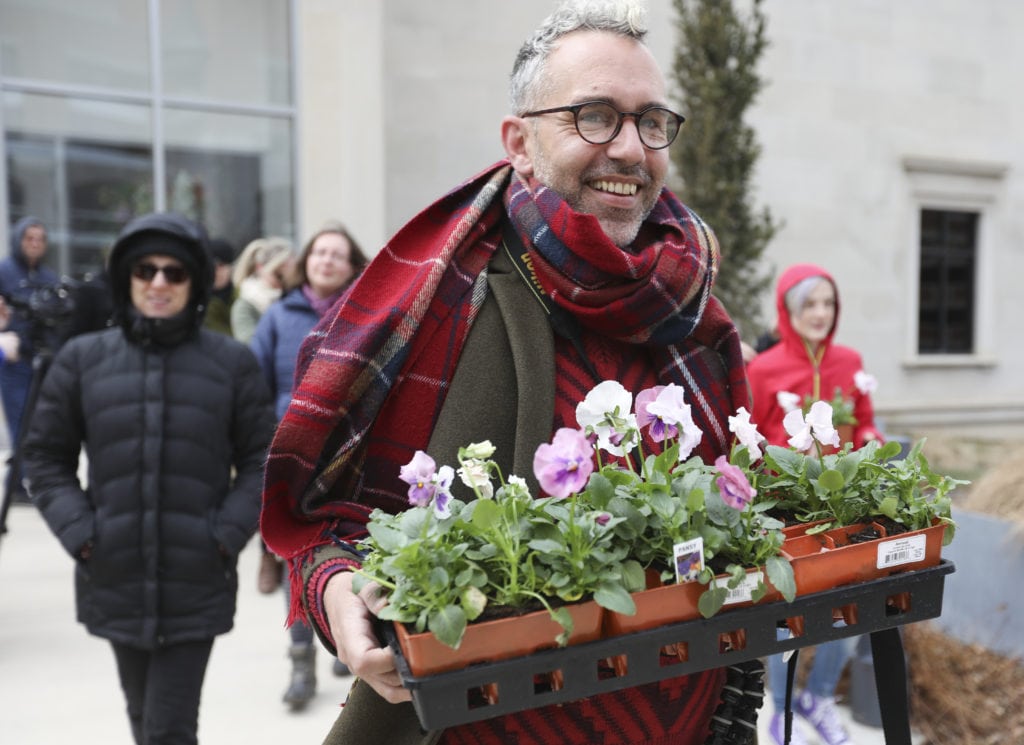 British artist Paul Harfleet carries a tray of pansies as he sets off to plant several of them on the University of Kansas campus as part of his Pansy Project, Friday, April 6, 2018. Harfleet planted several pansies in various spots on the KU campus associated with homophobic abuse or homophobic incidents.

“The reason I chose the pansy is because it has an association with homophobia, so it was an obvious choice to me,” Harfleet said of his project Friday during a planting tour on the KU campus. “Most people know what a pansy is, but also know you can call someone a pansy, especially in English.”

Harfleet also chose the flower because of its etymology — the word “pansy” comes from the French verb “penser,” meaning “to think.”

“The flower looks like it’s thinking, because it’s got its face bowing as if in deep thought,” he explained.

Lawrence is one of the few American cities Harfleet has planted pansies in — he’s also visited Washington and New York with his project. He was invited by KU’s Spencer Museum of Art. The trip was also sponsored by the KU Center for Sexuality and Gender Diversity; KU Student Senate; Friends of the Art Museum; the Linda Inman Bailey Exhibitions Fund; KU’s department of women, gender and sexuality studies; and the Sunrise Project. 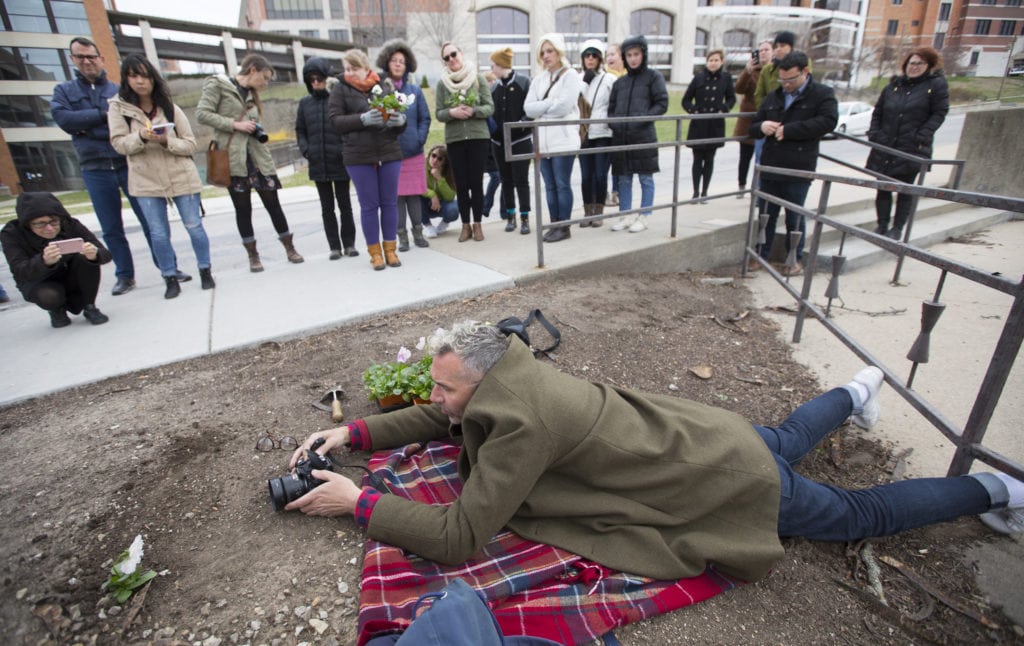 British artist Paul Harfleet photographs a pansy that he planted just north of the Spencer Museum of Art on the campus of the University of Kansas, Friday, April 6, 2018. Harfleet, who is the creator of the Pansy Project, planted several pansies in various spots on the KU campus associated with homophobic abuse or homophobic incidents.

On Thursday, Harfleet attended the premiere of his short documentary “Pansies” at the Spencer Museum, where he also read from his children’s book “Pansy Boy.” Earlier that day, Harfleet distributed nearly 600 free pansies to passersby outside the Kansas Union, encouraging them to plant their own.

On Friday, in addition to planting pansies at KU, the “guerrilla gardener” paid a trip to Lawrence High School, where he planted more pansies and visited with members of the school’s Total Equality Alliance. The students helped Harfleet name the photographs of the pansies he planted there.

One flower was planted in a small courtyard adjacent to the school’s rotunda, where students gathered last fall in a peaceful protest against bullying and harassment of transgender students. The other was planted outside the school entrance, where members of the Westboro Baptist Church reportedly staged a counterprotest in response to the students’ sit-in.

Joey Orr, the Spencer Museum’s Andrew W. Mellon Curator for Research, said he invited Harfleet to Lawrence after following the artist’s work for nearly a decade.

“On one level, I want people to understand Paul not just as an artist but as a researcher in his own right,” documenting social history as it unfolds, Orr said.

On another level, “it’s work that’s never done,” Orr said, referring to combating bigotry. “It’s work that has to constantly be reinvigorated, or it comes apart again.”

For more information and to see photos of Harfleet’s work, visit www.thepansyproject.com.

The first of the pansies I planted with @SpencerMuseum in #Lawrence #Kansas. "Beaten" Jayhawk Motel, Lawrence, Kansas. pic.twitter.com/XgrvH06mZq

My trip to #USA has come to an end, it has been incredible.
This was planted yesterday in #Lawrence #Kansas.
"Rock thrown at car window, with gay slur." Campanile, Lawrence, Kansas. Thanks to EVERYONE at @SpencerMuseum for their support of @ThePansyProject pic.twitter.com/uqR47H3SCz