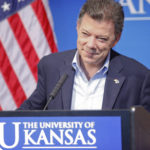 Colombian President Juan Manuel Santos listens to a question at a news conference on Monday, Sept. 24, 2012, at the Lied Center pavilion in Lawrence. Santos, a 1973 graduate of KU, visited the university before a meeting with the United Nations General Assembly in New York.

Colombian President and University of Kansas alumnus Juan Manuel Santos will visit his alma mater next week, KU has announced.

Santos, who graduated from KU in 1973 with degrees in economics and business, will receive an honorary degree and deliver remarks during a ceremony Wednesday at the Lied Center, 1600 Stewart Drive.

“President Santos is an inspirational leader who led difficult efforts to end the more than 50-year-long civil war in Colombia,” Chancellor Douglas Girod said (via KU’s press release) of the work that earned Santos the 2016 Nobel Peace Prize.

“I look forward to welcoming him back to his alma mater as a Nobel laureate and to presenting him with an honorary degree recognizing his commitment to peace for his country,” Girod said.

Both Girod and former KU Chancellor Bernadette Gray-Little will participate in a hooding ceremony Wednesday for Santos’ honorary degree, a Doctor of Humane Letters “for outstanding contributions to achieving peace in his country and the world,” according to KU’s news release.

Santos, a native of Bogota, Colombia, began his studies at KU in 1969. After graduating in 1973, he studied at the London School of Economics and Harvard University. Before his election to president, Santos served as minister of foreign trade, minister of finance and public credit and as minister of national defense.

His last visit to KU was in 2012. That year, Santos also received the KU College of Liberal Arts and Sciences’ Distinguished Alumni Award.

Wednesday’s event is free and open to the public. No tickets are required. Doors will open at 9 a.m., followed by the ceremony at 10 a.m.