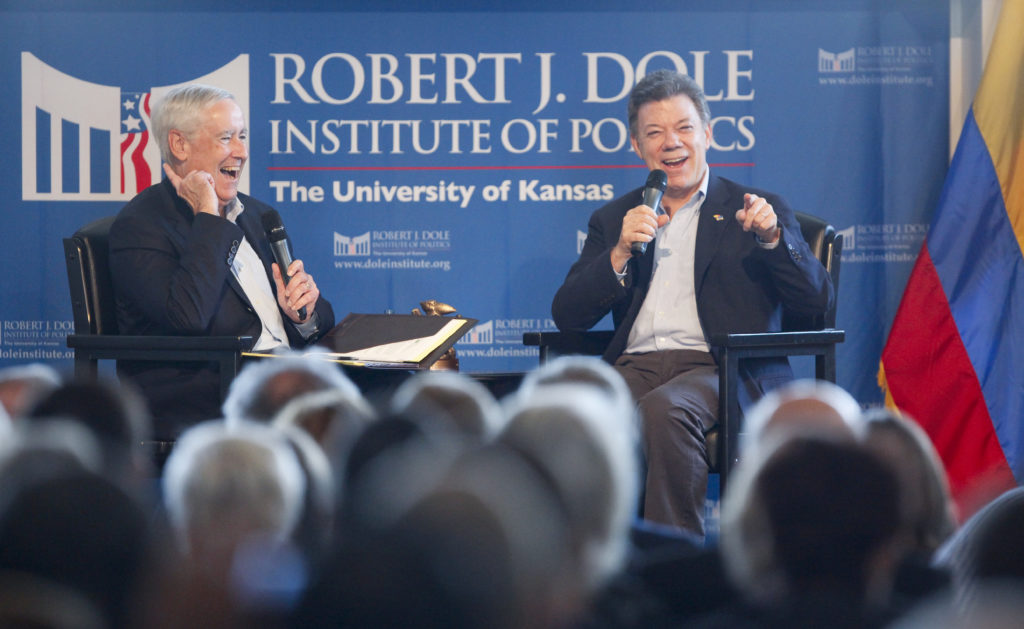 Colombian president Juan Manuel Santos, right, laughs alongside Bill Lacy, director of the Dole Institute of Politics, as Santos recounts a story Monday from his days as an undergraduate at Kansas University. Santos, a 1973 graduate of KU, was in Lawrence to receive the Alumni Distinguished Achievement Award.

Colombian President Juan Manuel Santos on Monday captured the attention of more than 500 people as he spoke of his days at Kansas University and the progress his nation is making. 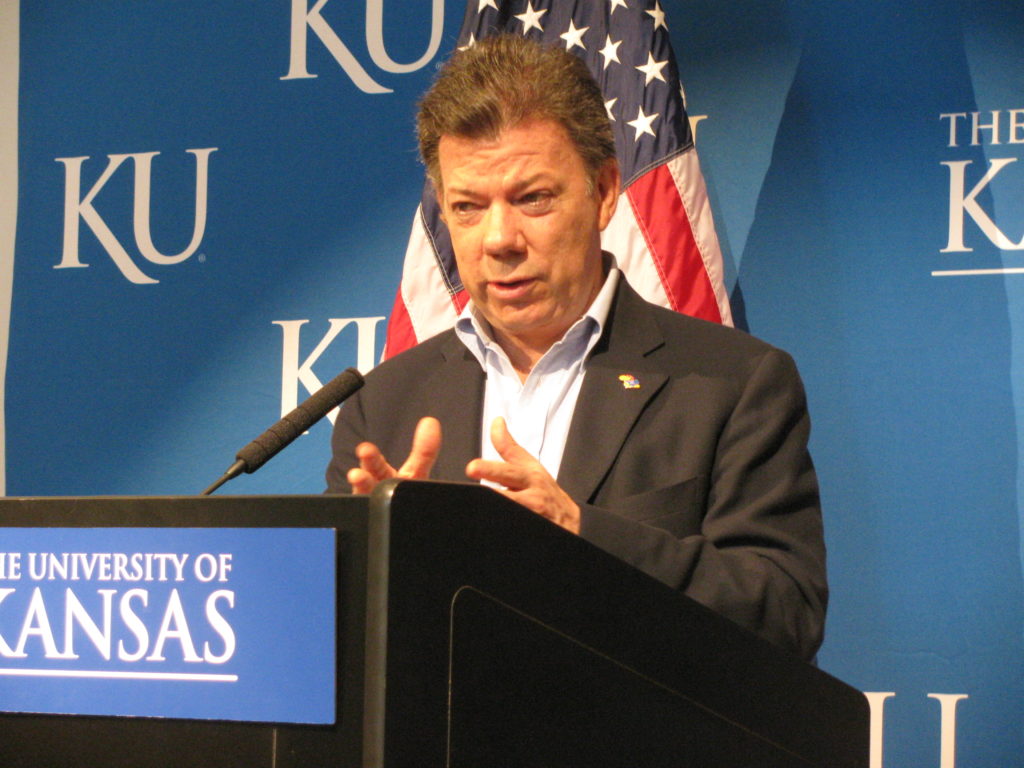 Colombian President Juan Manuel Santos on Monday returned for the first time to his alma mater Kansas University where he graduated in 1973.

A 1973 graduate of KU, Santos said his experiences as a student and member of the Delta Upsilon fraternity helped form the political ideals he has used in fighting for economic reforms, opening up a peace process in a long-running rebel dispute and cracking down on drug traffickers.

It was at KU, he said, that he learned about the strong commitment to freedom, democracy and the “American way of life.”

“A very important part of my career was made here at KU,” said Santos during his first trip back to KU since he earned degrees in economics and business. He is the first sitting head of state to visit the Dole Institute of Politics.

During his visit, he spoke with students and visited places he lived and studied.

“It was here that the seed was put, and it has been growing for the past 40 years,” he said earlier at a news conference.

Elected president in 2010, Santos has achieved land reforms and will start peace talks in two weeks with the Revolutionary Armed Forces of Colombia, or FARC, which has been warring with the government for decades. “We’ve been killing each other for 50 years,” he said.

He said he hoped the next time he came to KU, he would be talking about a peace settlement.

“The conflict with FARC needs to have a negotiated way out,” he said.

Before leaving for the United Nations General Assembly in New York, Santos was given the Alumni Distinguished Achievement Award, the most prestigious award given by KU’s College of Liberal Arts and Sciences.

At the Dole Institute, Santos answered questions posed by Dole Director Bill Lacy and then took questions from the audience. He came from a family of politicians and journalists and had served at various times as finance and defense minister before being elected president.

Later, Joe Spease of Overland Park, who was friends with Santos during his college days and attended the Dole event, said Santos was impressive even as a young man.

“He was a brilliant guy,” Spease said. “We talked all the time about politics and music. He was concerned about the future of Colombia. It doesn’t surprise me at all that he became president.”

For his part, Santos described himself as a “common student.” He said he learned to play poker at KU, went to rock concerts at the Union, and bought his first car with money he made by investing his poker winnings in Pizza Hut.

He said a friend of his “saved his life” by warning him to stop flirting with a girl who was dating a football player.

Nancy Lessig of Lawrence said she enjoyed Santos’ talk. “He included a lot of different topics and really showed a lot of progressive thinking,” Lessig said. She added it was nice to hear that his life at KU had such an impact.

Santos said Colombia was making strides in shedding its drug trafficking past. Its economy is growing rapidly, he said, and he urged U.S. companies to invest in the country.

KU Chancellor Bernadette Gray-Little extended an invitation to Santos to visit KU during a March 2011 meeting she had with him in Bogotá, Colombia.