Three’s Company: LHS offensive linemen make the most of their continuity 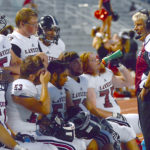 Since the seventh grade at South Middle School, Jacob Mills, Nick Englebert and Kristian Russell have lined up alongside each other on the offensive line.

Each season, they’ve remained in the same spots. Mills at center. Englebert at guard. Russell at tackle.

“We’ve all been playing right next to each other every day,” Russell said. “I don’t know how we haven’t killed each other yet.”

When Lawrence High’s football team moved to a platoon system in the summer of 2016, where most players stick to one side of the ball, the Lions featured an offensive line without any returning starters. Once again, Mills, Englebert and Russell were positioned to play together.

Away from the field, they’ve all grown into good friends. They hang out together outside of football practices. It’s not unusual to see them walking the halls of the school.

Their playing styles are slightly different — Russell is the biggest lineman at 6-foot-2, 274 pounds — but similar to puzzle pieces, they fit together. It’s the same thing with their personalities.

“Nick is more funny, but when it comes down to it he’s super aggressive on the field, which is what we need,” Mills said. “Kristian can be funny sometimes, but he’s more of like the cool type of kid, you know, with his (long) hair and everything.”

After playing together for so many years, the trio of linemen are comfortable on the field. Russell said there’s several plays where they don’t even have to utter a word to each other, they already know what their teammate will do.

“I feel like it’s been a pretty big advantage,” Mills said. “We’ve played together for so long that it’s kind of like second nature to be next to them.”

Englebert added: “We know each other’s strengths and weaknesses. The camaraderie is really nice. Familiar faces all around you just makes you more comfortable and you settle in more.”

When Russell was playing in youth football, he primarily lined up at center. As he became bigger and taller than most of his teammates, he moved to offensive tackle, which helped the 6-foot, 208-pound Mills stay at his natural position. Englebert, with his athleticism at 5-8, 210 pounds, slid into offensive guard.

During Friday’s City Showdown against Free State, all three of them take their familiar places on the left side of the Lions’ offensive line.

“Those three have really done a great job of one, staying healthy, and two, really doing a great job of leadership,” Lawrence coach Dirk Wedd said. “Everyone raves about our offense and it is special, but we go into every game thinking we have to get 100 yards between the tackles. That opens everything else up.”

Helping the Lions (4-3) average nearly 40 points per game, the team’s three returning offensive linemen are just happy that they have a chance to enjoy their senior seasons together.

“It’s been pretty cool because they are some of my best friends,” Mills said.