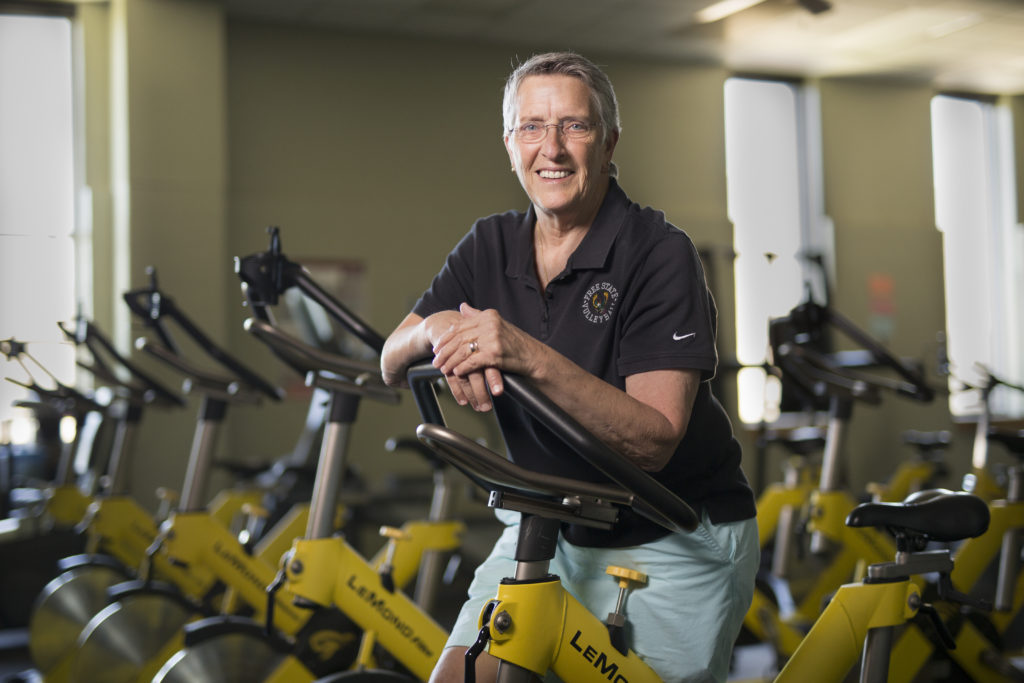 Free State High School physical education teacher Nancy Hopkins is retiring after 44 years in the school district. Hopkins is photographed in the cardio room at the school, which she is responsible for creating after securing donations for the many pieces of equipment. The room has since been named after her.

Nancy Hopkins doesn’t care much for convention. Never has.

While growing up a “tomboy” in Emporia, conventional wisdom dictated that girls shouldn’t play sports. Hopkins did anyway, matriculating to Emporia State University and playing outside hitter and shortstop for her school’s volleyball and softball teams.

After graduating from Emporia State, Hopkins took a job as a physical education teacher at West Junior High in Lawrence. Her young female students had no athletic outlet aside from cheerleading, so she broke again from conventional wisdom and, with the help of her colleagues, helped to bring girls’ sports programs to Lawrence’s middle schools at a time — 1973, a year after the passage of Title IX — when there were none.

That first year, Hopkins’ volleyball players wore their gym uniforms with the numbers taped on, because they had no official team uniforms. They were a ragtag bunch — Hopkins and her colleagues accepted anyone who wanted to be on the team — but she and her “smiling” girls didn’t care much, “just because we wanted to play,” she says.

“I think I’ve done a lot of things that give me a sense of pride,” says Hopkins, 65, who retires this summer after 44 years teaching in Lawrence Public Schools.

“That’s one of them, certainly, because those are opportunities that I didn’t have,” Hopkins says of creating the district’s first sports programs for middle school girls, efforts she led with fellow junior-high PE teachers Carol Church and Donna Largent, nee Wooden.

Of all the faculty members retiring this summer from Lawrence Public Schools, Hopkins has had the longest tenure in the district. With her long career finally winding down, the former Free State High School volleyball coach and PE teacher says she’s “getting a lot of love right now.” After 44 years, Hopkins says, “I’ve come into contact with a lot of people.”

Her first ninth-graders at West Junior High are in their late 50s now. A scary thought, Hopkins admits jokingly.

“And I’ve had second-generation students for years, and even third-generation,” she says, reflecting on her career at Free State. “Every year, there’s kids who come up to me and say, ‘Do you remember so-and-so? That’s my mom,’ or, ‘That’s my dad,’ or, ‘You had both my mom and dad.’ Maybe that’s a sign you’ve been here too long.” 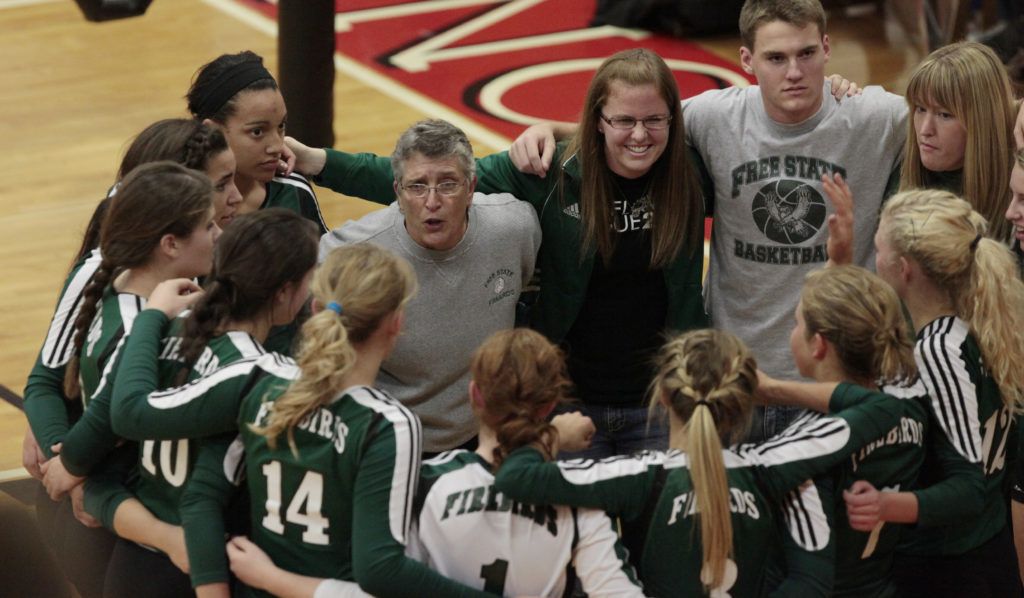 Or maybe it’s a sign that Hopkins has made an impression on her students over the years, in her own no-nonsense, tell-it-like-it-is teaching and coaching style that has continued to defy convention in her time at Free State.

Hopkins, who retired two years ago as Free State’s longtime volleyball coach, knows well the “good ol’ boys system” that dominates the sports world. It was around when she was a little girl in Emporia, and it’s still around now, even amid a generation of young women who grew up playing competitive sports, Hopkins says.

“And sometimes as a coach, even as a female coach, you can kind of become engrained into that good ol’ boys system,” she says. “But I kind of kept my distance, because I don’t want to be one of the good ol’ boys — I want to be somebody who accepts everybody.”

In her 44 years in the Lawrence district, that’s what Hopkins has done.

When one of Hopkins’ students, a girl living with cerebral palsy, couldn’t do sit-ups on her own, Hopkins patiently held the student’s feet and helped her through the exercises until she could do it herself. On Fridays, while everyone else ran 2 miles, that student only ran 1 — but, Hopkins says, “she would do it” on her own, and because she wanted to. That “awesome” girl, Hopkins says, “is now a teacher of cerebral palsy kids just like her” in Lee’s Summit, Mo. Hopkins knows because she still receives a letter from her former student every Christmas.

Another student, who was deaf, played volleyball under Hopkins at West before competing on Lawrence High School’s softball team and then for her college’s team. Fifteen or so years later, Hopkins received a Christmas card — are you guessing a theme here? — from that student, telling her she’d since become the head softball coach at Fordham University.

And when one student contacted her after several years, saying he’d be in Lawrence for a few days and wanted to grab lunch, Hopkins heard a story she’d since forgotten. One day, as Hopkins tells it, she was walking through the hall when she overheard one student using a gay slur against another. “You ripped him a new one,” the kid recounted to her years later while at lunch.

“And I said, ‘I did? I don’t even remember that,’ and he said, ‘Oh, I’ll never forget it,” Hopkins recalls. “And he said, ‘You showed me that there was an adult in the building that was on my side.'”

“That’s because I’ve been there,” Hopkins, who is openly gay, remembers telling the student. Though outspoken when it counts, Hopkins prefers to think things over thoroughly before speaking, she says. But the longtime educator also has “no qualms,” she says, about being there for her students — and relating on a personal level — when it counts.

One of her proudest achievements while at Free State, she says, has been establishing an LGBT section in the school’s library, which she did in 2015. It was initiative Hopkins led herself, emailing authors asking if they could help. Soon, the donations began pouring in, and Hopkins had received so many books — more than 500, by her count — that she ended up with duplicates, which she later gifted to Lawrence High. 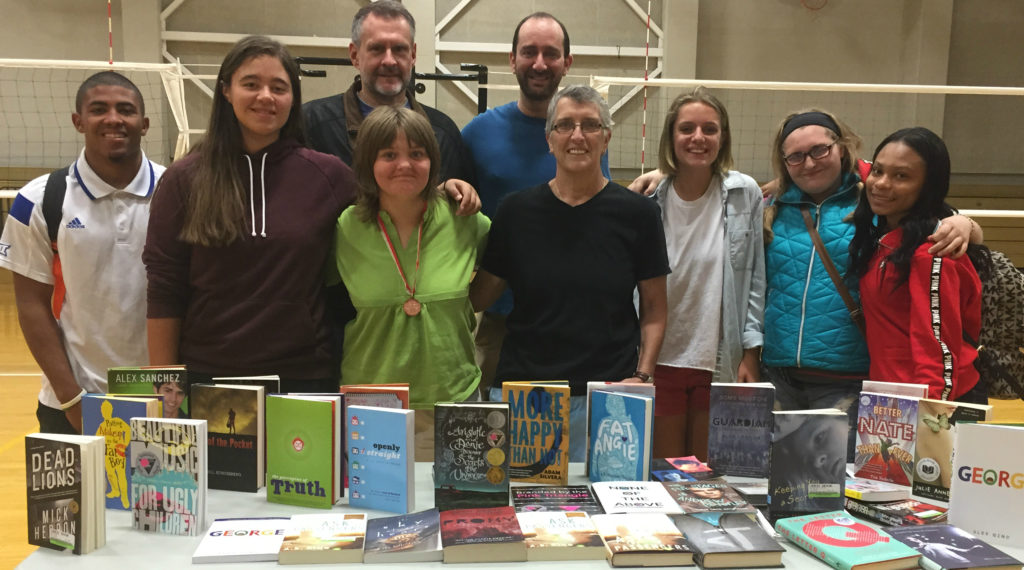 Those in the Free State community might also recognize Hopkins’ go-getter spirit in the school’s cardio room, which basically functions as a small fitness center — complete with treadmills, elliptical machines and a small fleet of shiny yellow stationary bikes — for students and staff. Hopkins raised the money to renovate and equip the room all on her own.

Years ago, the space existed as a meeting room for the school’s football team, who would gather there to watch game footage. It was filled with couches brought from players’ garages and basements, and it permanently “stunk,” Hopkins says, with the smell of sweat that had seeped into the grungy furniture. The room also became an overstuffed storage closet for surplus athletic gear, she says, some of it broken.

“It just became a junk pile,” Hopkins says. “So, I thought, ‘There’s got to be a better use for that room.'”

When administration said there weren’t any funds to pay for the renovations and equipment Hopkins proposed for the space, she began to raise the money on her own by reaching out to former volleyball players and their parents. That helped, and so did the estimated $22,000 to $30,000 Free State, under the leadership of then-principal Ed West, eventually put toward the cardio room.

But it wasn’t enough, and Hopkins soon began an ambitious campaign to secure the necessary funds. She reached out to celebrities, receiving donations — often in the form of autographed memorabilia — from athletes such as Tiger Woods, Barry Sanders and Joe Namath, and Hollywood power players such as Elizabeth Taylor, Denzel Washington and Jim Carrey. Hopkins seems especially proud of the gift she received from Yoko Ono: an iPod engraved with a message of peace and love from Ono herself. 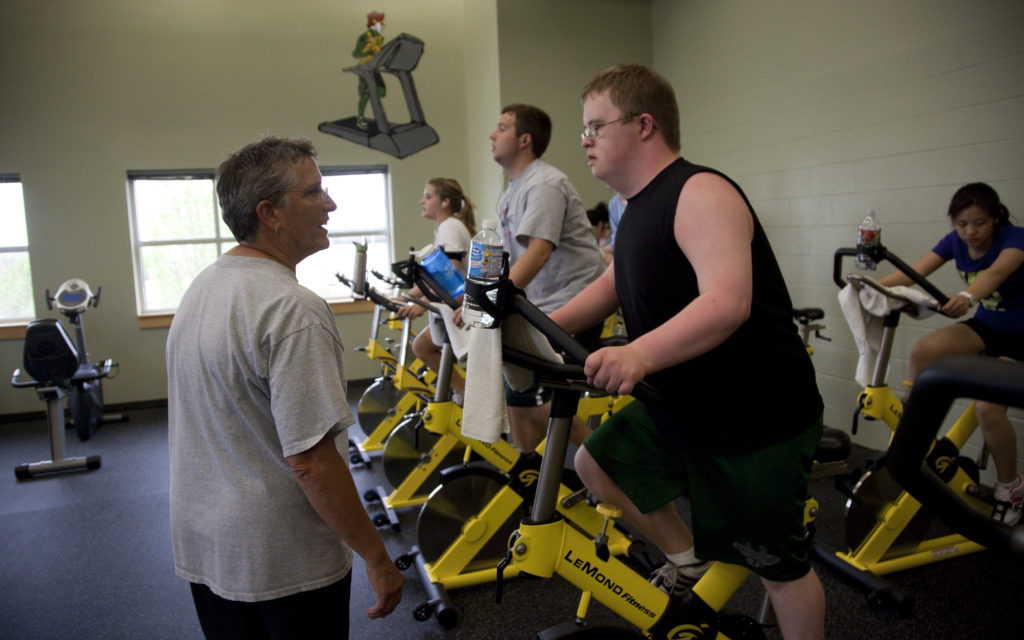 After auctioning the items in 2012, Hopkins estimates she’s raised about $70,000 total for the cardio room.

“It’s pretty amazing,” she says, especially seeing the students who otherwise might be intimidated by fitness learn to love it. “We have classes in there every day. And I’ve had kids in that class tell me that they’ve quit smoking, that they’ve lost anywhere from 10 to 30 pounds in a semester. I’ve had pregnant kids in there working out until the day they had their baby. But they’re getting exercise. Isn’t that what it’s all about?

Hopkins says she’s known the difference it’s made to her students. But last week, during a staff luncheon at Free State, Hopkins says she felt truly validated when her peers presented her with a plaque — “Nancy Hopkins Cardio Room,” it read. Because of her efforts, the sign now hangs in that room.

After retirement, Hopkins plans to do some substitute teaching. Not very often, she says, but enough to keep her hand in, when she’s not hitting the links. Hopkins knows she’ll miss “the kids,” as she lovingly refers to them, the most.

She’s accomplished a lot in her 44 years, and she’s proud of that. Because of her efforts, girls now have a chance to play sports competitively in the district’s middle schools. Athletes and nonathletes alike have the chance to get healthy in the Nancy Hopkins Cardio Room. And young LGBT students can now see themselves represented in the books they read in their school library.

All are points of pride for Hopkins, she says, in a career well spent. But, above all else, “I think I’m just proud of the fact that I chose a profession that, to me, is very satisfying,” although not financially, Hopkins says, “and has afforded me relationships that I will have for the rest of my life.”

“Those two things are worth way more than money,” Hopkins knows. “So, I’m good.”