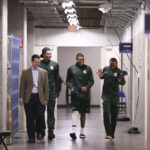 KU-Michigan State: By The Numbers

Asked Saturday what his final message to his team would be before the Jayhawks took the floor against Michigan State in Sunday’s second round, KU senior Landen Lucas focused on one thing.

“Treat the beginning of the game like it’s very serious, almost like it’s the last couple possessions because it’s gonna matter a lot,” Lucas said.

On Friday, both the Jayhawks and Spartans got off to slow starts before exploding midway through their first-round clashes and snagging run-away victories. Neither team is going to want to risk a similar start in this one and Lucas and his teammates are well aware of the importance of being the first team to find solid footing.

“You gotta come out to a good start,” junior Devonte’ Graham said. “You can’t let ’em punch you in the mouth and get down early. You want to come out real aggressive, especially on the defensive end.”

In both size and depth, it’s Michigan State that has the advantage down low in this one, but the Jayhawks believe they have enough to figure out a way to handle the Spartans’ big bodies.

While some of that will come from solid play — not to mention help — from KU’s backcourt, more of it will come from how well Lucas and freshman Josh Jackson perform against Michigan State bigs Miles Bridges and Nick Ward.

“They have some great size,” Lucas said. “They play very well to it, they have a lot of plays that can take advantage if you fall asleep at all. It’s tough, but you’ve just gotta be aware. We’ve faced teams like that, so it’s nothing new for anybody. I don’t know of a specific team, but we’ve seen players that are similar, the most recent was maybe Texas when we played them.”

While the Spartans have a deep bench and can play a number of styles, Self said he expected a fast-paced game and emphasized that KU would have to be sound defensively, all over the floor, throughout the game.

“They’re a hard team to prepare for in one day because they run so many actions, like playing West Virginia on a one-day (turnaround). They run so many things you really have to play to your principles.”

Playing loose and with a free mind served the Jayhawks very well on Friday night, when they were finally able to do it. And even though both the competition level and the stakes have gone up in Round 2, the emphasis for Kansas will be the same.

“My style won’t change, our style as a team won’t change,” KU senior Frank Mason III said. “We just play the way coach wants us to play, execute our plays and just really guard on the defensive end.”

Added Self: “I think both teams will try to play fast, I think they’ll try to score quick. That’s how we play and that’s how (MSU coach Tom Izzo has) always played. But if you don’t score quick, hopefully our defense is good enough that (they’re) gonna have to earn (their) points. I think it’ll have a good pace to it. I’m not gonna predict a number of points because you can play fast, but if you can’t get a shot quick, you don’t score quite as many points. But I think it’ll be an up-and-down game, at least initially, until it kind of plays out to see what styles both teams will benefit the most from.”

Playing with a talent advantage against UC Davis, KU constantly tried to fly up the floor after misses, steals and even after makes. Look for more of the same in this one, as the Jayhawks try to impose their will on the Spartans.

With three starters and four regular rotation players being freshmen, Michigan State enters this one with much less experience in these situations than the likes of Mason, Graham, Lucas and a few other Jayhawks. While that could benefit Kansas, especially late in a tight game, Self cautioned against thinking the advantage of age would mean too much in this one.

“They’re playing a lot of young kids, and when you have young kids you may have some inconsistencies,” Self said. “But I think we saw (Friday) night how the team can play when everybody’s playing well. They’re very capable of defeating anybody in the country, including us, and they seem to be playing pretty darn well down the stretch.”

Added Mason: “It doesn’t really matter what year a player is. I just try to have the same mindset every game, stay aggressive, stay in attack mode.”