Self named Naismith Coach of the Year finalist 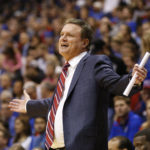 Kansas head coach Bill Self smiles as he barbs an official during the second half, Tuesday, Dec. 6, 2016 at Allen Fieldhouse.

Tulsa, Okla. ? Kansas coach Bill Self on Thursday was named a finalist for the annual Werner Ladder Naismith Men’s College Coach of the Year award.

• Kansas has been ranked in the Top 5 in all but one week by The Associated Press and all but two weeks in the USA Today Coaches’ polls. The Jayhawks have been No. 3 or higher in every poll since Dec. 5.

• Kansas is 5-0 against teams ranked in the top-10 this season, including a 4-0 record against top-five opponents.

• In his first home contest of the season, a KU 86-65 win against Siena (Nov. 18), Self became the winningest coach in Allen Fieldhouse history. At 220-10, Self has more conference titles (13) than home losses in Allen Fieldhouse.

• From Nov. 15-Jan. 21, Kansas won 18 consecutive games, which was the second longest winning streak in Self’s 14 seasons and marked the 15th time in the Self era the Jayhawks have won 10 consecutive games.

• Kansas won the CBE Hall of Fame Classic (Nov. 21-22), which was the sixth in-season tournament title in Self’s 14 seasons at KU, including each of the last three years.

• Self was named a finalist for induction to the Naismith Memorial Hall of Fame.

• Self guided Kansas to its NCAA-record-tying 13th-consecutive Big 12 regular-season title in 2016-17. The Jayhawks tied UCLA’s 13-straight from 1967-79. UCLA accomplished the feat under three coaches, while Kansas’ current run has been under Self.

Four Jayhawks were named to the 2017 Academic All-Big 12 team giving Self a conference-high 35 honorees during his time a Kansas.

Voting will run through the end of the month and the award will be given out at the Naismith Awards annual Final Four Awards Brunch on Sunday, April 2 in Scottsdale, Arizona.