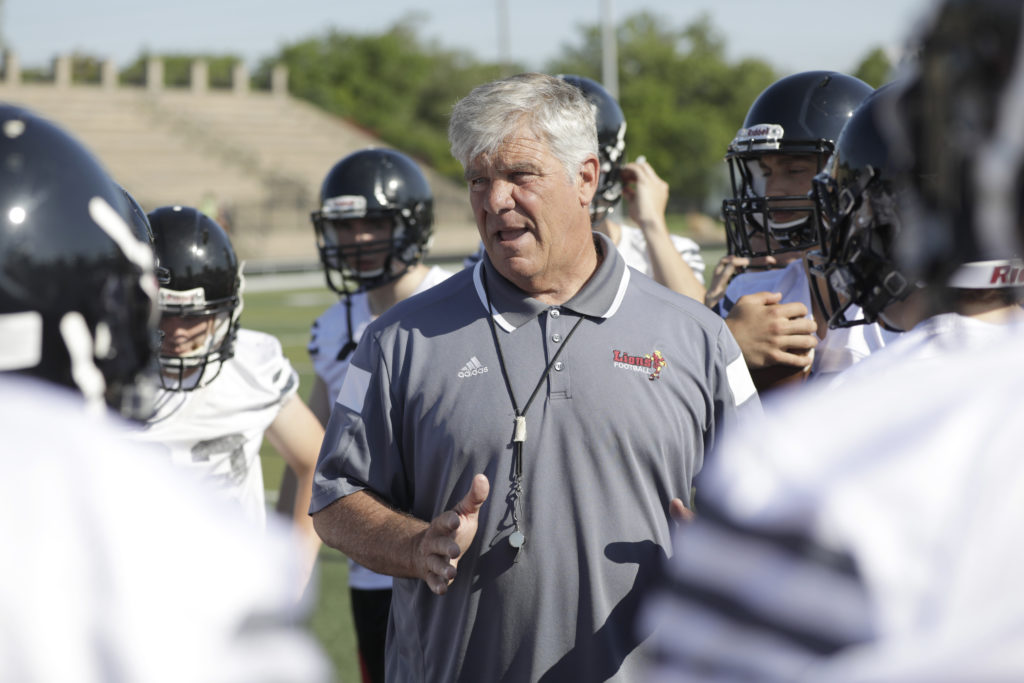 Lawrence High School football coach Dirk Wedd talks to his team prior to a summer football practice Wednesday at LHS. Wedd will be retiring as football coach at the end of the 2017 season.

While Lawrence High seniors Nick Englebert and Jacob Mills struggled to get to sleep Monday night in anticipation of the final high school summer camp of their football careers, an unexpected teammate was experiencing similar butterflies — head coach Dirk Wedd.

Wedd, who has been coaching football for the past 40 years — 28 of them at LHS, announced last November that he would retire at the end of the 2017 season and, therefore, is guiding the Lions through one final summer camp before he hangs up his whistle.

Never one to put the focus on him, Wedd said this week’s camp has felt a lot like all of the others, with the same goals and objectives dominating each day.

“It’s about the seniors, like always,” Wedd said. “Every year you worry about them having the greatest experience and that’s what we’re focused on right now. It being my last year, I’m right there with the seniors. I’m one of them.” 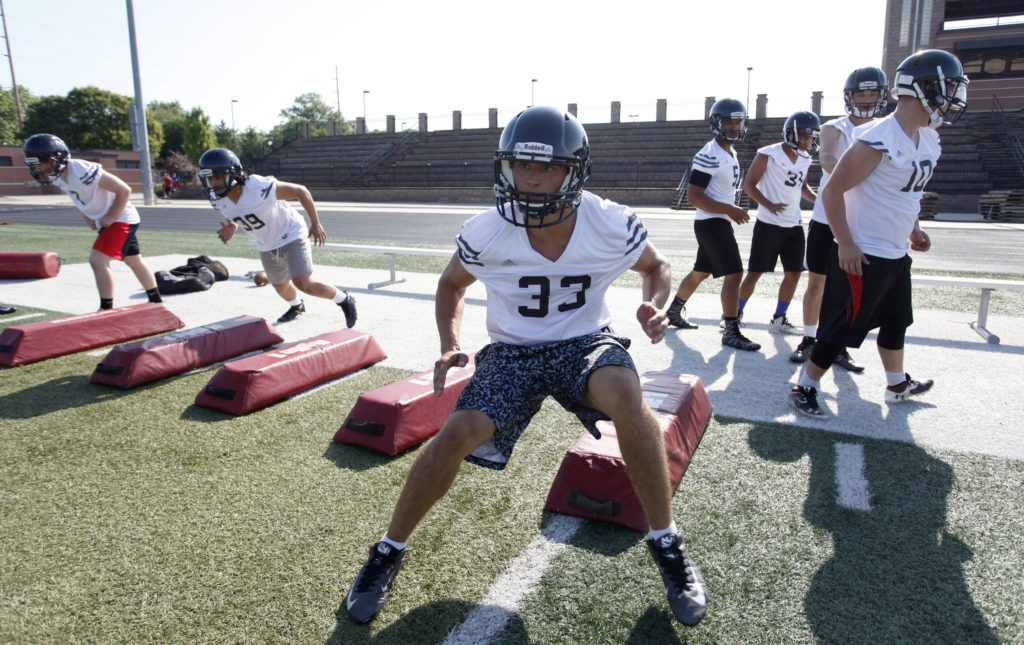 Because there’s a lot of football still left this week and months before Wedd’s final season opener, the veteran Lawrence High coach said his mind was not on this week’s camp marking the beginning of the end. Instead, it’s on the dozens of other minor details that go into coaching any sport at the high school level.

“You’re so busy, you know,” Wedd said. “You go into every season ready to work your tail off and hoping good things will happen because you owe it to the kids. This is just one of 40 that I’ve had. At some point in time it may (hit me). But right now I’m just trying to make sure everyone’s got their forms in and has their helmets fitted and we look like a football team at the end of the day.” 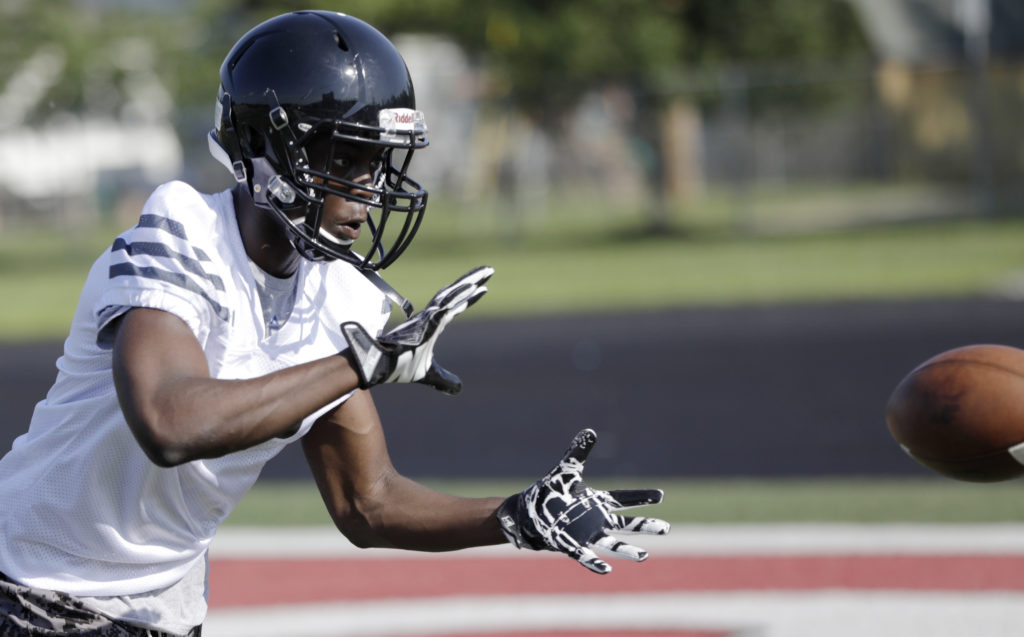 That may be Wedd’s focus. And it is undoubtedly genuine. But just because he’s not making the start of his farewell tour about him does not mean his players have to avoid that.

Englebert and Mills, both starters on the Lions’ offensive line, said even though Wedd and his staff have not addressed this being his final season since the news broke in November, that does not mean they’re willing to pretend it isn’t a factor in everything they do.

“I feel honored that he kind of chose us to go out with,” Englebert said. “And I feel like we owe him a good season.”

Added Mills: “I know we all want to help him get his 100th win as fast as we can. That’s a big milestone.” 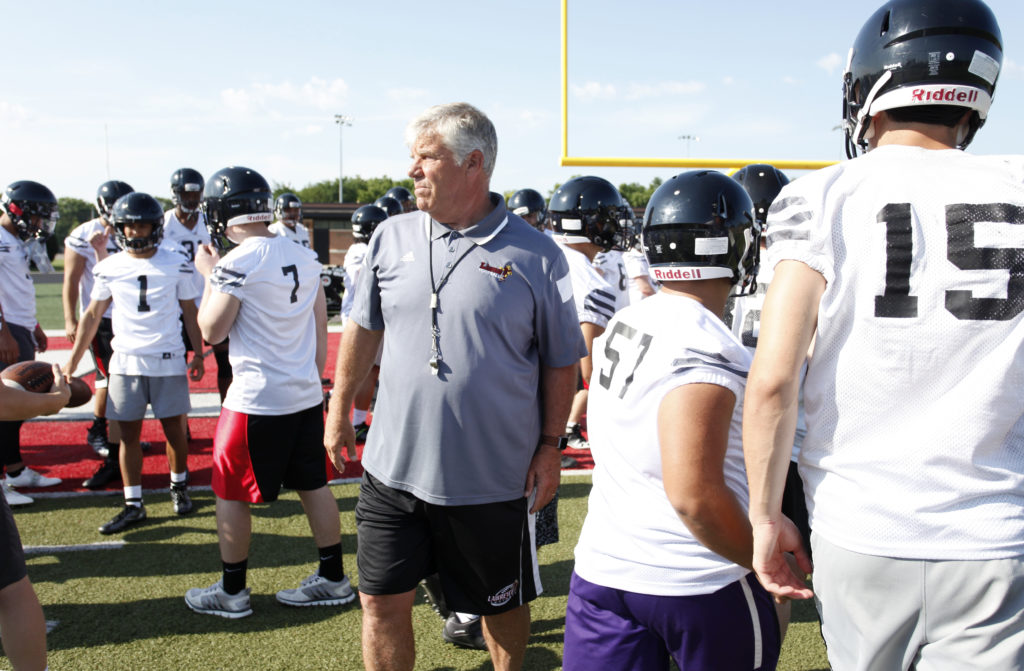 Lawrence High School football coach Dirk Wedd breaks from a huddle after talking to his team prior to a summer football practice Wednesday at LHS. Wedd will be retiring as football coach at the end of the 2017 season.

So is deciding to call it a career. While the ideal ending obviously would be to go out with a state championship and an undefeated final season, Wedd said he would not let himself or his team get caught up in any kind of win-one-for-the-gipper type of mentality.

At Lawrence High, the goals are always the same or at least they have been for as long as Wedd has been around. While winning is included in them, it takes a back seat to playing hard, working hard, being a good teammate and representing the school and the community the right way.

In that way, Wedd said he already knew that his final season would be a success, win or lose, because of the make-up of the young men in uniform.

“They’re good kids,” he said. “They’re like all Lawrence High kids. They understand the tradition and what it takes to carry that on. My wife told me I was an idiot when I didn’t go out with (Amani) Bledsoe (in 2015). And then last year we overachieved (at 6-4) with a bunch of kids that we thought were gonna win two or three games and she goes, ‘That would’ve been OK.’ So now we’ve got to this, but it’ll be a lot of fun.”

As for what his players are expecting from Wedd given that it is his final go around, Englebert and Mills were happy to venture a guess.

“I expect a lot more yelling,” Englebert said with a laugh. “He’s gonna try to go out on top.”

Added Mills: “Yeah, I agree. I think he’s gonna coach us hard, and we’re looking forward to that.”