Tom Keegan: Bragg suspension might equate to addition by subtraction 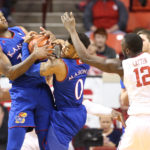 In many ways, Bragg hasn’t really seemed to be all there much of the time this season.

He doesn’t play with the same enthusiasm, the same confidence, as during a promising freshman season when he wasn’t needed as much on this season’s depth-shy team needed him after Udoka Azubuike went down with a season-ending wrist injury.

A McDonald’s All-American from Cleveland, Bragg has averaged 6.1 points, 4.8 rebounds, 2.6 personal fouls and 1.1 turnovers in 15 minutes a game.

The aura of disappointment that surrounds the personal-foul-plagued Bragg intensifies given the level of his potential. At 6-foot-10 and 240 pounds with explosive jumping ability and the speed to run the floor faster than most men his size, Bragg teases coaches and teammates with talent, but ultimately doesn’t deliver.

His first suspension, imposed when he was charged with battery of his girlfriend, lasted one game and was rescinded when charges were dropped after a district attorney reviewed surveillance video that resulted in his girlfriend being charged.

Getting cleared of wrongdoing didn’t seem to clear his head.

Kansas can’t get away with playing six players in Bragg’s absence, so freshman Mitch Lightfoot and junior Dwight Coleby will be pressed into action.

Lightfoot, a 6-8, 210-pound freshman from Gilbert, Ariz., lacks the experience to have sophisticated attention to detail, but plays with a physical edge. He hits the boards hard. In 65 minutes, he has 17 points and 18 rebounds. He has made just 2 of 12 free throws.

Coleby, a transfer from Ole Miss who missed out on what would have been valuable practice time last season because he underwent ACL surgery, can block shots and rebound. A 6-9, 240-pound native of Nassau, Bahamas, Coleby has totaled 12 points, 20 boards and six blocked shots in 57 minutes.

Neither Lightfoot nor Coleby is ideally suited to battle the talented big men from Kentucky (Saturday in Lexington) and Baylor (Wednesday in Allen Fieldhouse). Then again, neither is Bragg. Potential is no substitute for production and it’s tough to produce without having a head clear enough to avoid a suspension for violating team rules.