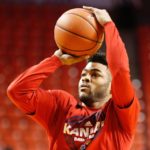 Kansas senior guard Frank Mason III puts up a shot in pregame warmups prior to Tuesday's game against Oklahoma at Lloyd Noble Center.

Kansas senior Frank Mason III has enjoyed a stellar season from the start and helped lead No. 3 Kansas to a 23-3 record and two-game lead in the Big 12 standings with five games to play.

On Wednesday, the four-year Jayhawk was named one of 10 finalists for the 2016-17 Senior CLASS Award in college basketball, given annually to a player who focuses on the total student-athlete experience and uses his or her athletic platform to make a positive impact as leaders in their communities.

The acronym stands for Celebrating Loyalty and Achievement for Staying in School and student-athletes become eligible for the honor by being classified as NCAA Div. I seniors and have notable achievements in four areas of excellence: community, classroom, character and competition.

The 10 finalists were chosen by national media from the list of 30 men’s candidates announced in January. Nationwide fan voting begins immediately to help select the winner, and fans are encouraged to submit votes online at the Senior CLASS Award website through March 20.

Fans will be able to vote daily and their votes will be combined with those of the media and Div. I head coaches to determine the winners.

The Senior CLASS Award recipients will be announced during the 2017 NCAA Men’s Final Four.

For more information on each of the finalists and to vote online, visit seniorCLASSaward.com.