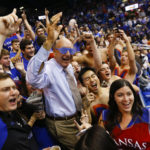 ESPN commentator Dick Vitale has some fun with the Kansas student section prior to tipoff against Florida on Friday, Dec. 5, 2014 at Allen Fieldhouse.

Eighteen hours later, colorful analyst Dick Vitale still was juiced by witnessing the unlikeliest of Big Monday comebacks, one that ended with Kansas stealing a victory from West Virginia, 84-80 in overtime.

Vitale criticized fans who headed for the exits with Kansas down 14 with inside of three minutes remain. He issued a you-never-know warning because of the 3-point shot, but even at that was stunned by the comeback.

“If ever a game you thought was lost, where there was no way they logically could come back with the way the whole trend was going, this was it,” Vitale said. “But the way this game is with the 3-ball, it gives you such momentum. The 3-ball came alive, (Devonte’) Graham started knocking down 3’s and that made their defense come alive. Frank Mason made all his free throws and don’t forget about what Lagerald Vick gave them.”

“Name a better one,” Vitale answered. “Such veterans. They understand how to play and have such a great feel for the game. Kentucky’s two freshmen (Malik Monk and De’Aaron Fox) are very talented, but they’re so young, so they’re a little inconsistent.”

Kansas won in Lexington, so that score has been settled. Creighton’s Maurice Watson and Marcus Foster were a great tandem, but Watson was lost for the season in mid-January after suffering an ACL tear. UCLA freshman do-it-all point guard Lonzo Ball and sharp-shooting senior Bryce Alford mesh well, but the Bruins don’t rely quite as heavily on them as Kansas does on Graham and Mason.

“When you think about how one was headed to Appalachian State and the other to Towson, now they’re doing what they’re doing for elite Kansas,” Vitale said. “They’ve definitely earned the argument as the premier backcourt in the nation. With (Josh) Jackson and Mason being such stars, Graham has been underrated, but he’s a star in his own right.”

Vitale won’t be back at Allen Fieldhouse until next season, when he again will mingle in the student section and move to the beat of the pep band with a random Rock Chalk Dancer.

“Such a special place,” Vitale said. “It’s so genuine, so real, hoop hysteria at its best.”

Vitale saw Allen Fieldhouse at its best Monday night when KU came roaring back with the roar of crowd providing the background music on a most memorable night.