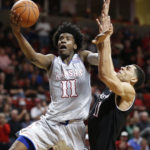 Kansas guard Josh Jackson (11) gets in for a bucket against Texas Tech forward Zach Smith (11) late during the second half, Saturday, Feb. 11, 2017 at United Supermarkets Arena in Lubbock, Texas.

Josh Jackson has done it again, though this one likely came as no surprise.

Two days after exploding for a career-high 31 points in an 80-79, road victory over Texas Tech, Jackson was named the Phillips 66 Big 12 Player of the Week, as voted by a media panel that covers the conference.

It marks the second time this season that Jackson earned the player of the week nod and seventh time he had been given a weekly award. Jackson also has been named Big 12 Newcomer of the Week five times this season.

It wasn’t just the Tech game that earned Jackson the honor. In two road wins by the Jayhawks — Kansas State and Texas Tech — Jackson averaged 24.5 points per game and shot 70.4 percent from the field. He scored 18 points, including 2-of-2 shooting from 3-point range, against the Wildcats in last Monday’s 74-71 victory in Manhattan.

He shot 80 percent from the floor against the Red Raiders in scoring his career-high, which included 18 points in the second half and the last seven Jayhawk points to seal the victory.

Jackson’s 31 points in Lubbock, Texas, were the most by a KU freshman since Andrew Wiggins scored 41 points at West Virginia on March 8, 2014.

Historically, Jackson’s seven weekly Big 12 honors in one season are the most ever by a Jayhawk and have tied KU’s career mark set by Nick Collison, who was newcomer of the week twice and player of the week five times during his KU career from 1999-2000 to 2002-03.

Here’s a look at Josh Jackson’s honors to this point in his freshman season:

• Preseason Big 12 Freshman of the Year

Jackson and the Jayhawks return to the court tonight at 8 p.m. for a Big Monday showdown with West Virginia at Allen Fieldhouse.