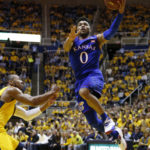 Kansas guard Frank Mason III (0) soars in for a bucket against West Virginia guard Jevon Carter (2) during the first half, Tuesday, Jan. 24, 2017 at WVU Coliseum.

As most everyone knows, Kansas coach Bill Self throughout the years has made winning the Big 12 Conference a point of emphasis for his KU teams.

But for one night, in the thick of this season’s chase for the title, Self would like to put the Big 12 race on the back burner and play a game for pride.

“I hope our guys approach the West Virginia game like it’s not even part of our league race; that it’s us against them,” said Self of the 8 p.m., Big Monday showdown with West Virginia at Allen Fieldhouse. “They whipped us the last time we played and we know we’ve gotta be a lot tougher and handle pressure.”

Fresh off of their pressure-packed, close-out victory over Texas Tech over the weekend in Lubbock, Texas, the Jayhawks will take the floor tonight looking to both avenge one of their two Big 12 losses and prevent a second consecutive loss at Allen Fieldhouse.

The last time KU suited up at home, the Jayhawks fell from in front and watched Iowa State snap their 51-game winning streak inside their home building.

All of those factors, along with others, such as improving their defense, getting senior Frank Mason III healthy and executing a crash-course, cram session on that West Virginia press, will keep Kansas from thinking too much about what went down in Lubbock and focused on what’s ahead.

“It’s big,” said KU senior Landen Lucas of the road win that maintained KU’s one-game lead in the Big 12 standings. “But we also have to understand that it doesn’t mean much if we don’t handle business on Monday. We just gotta move on. We’ve got another game coming up. It’s against a team that beat us and we just gotta take them very seriously and get that home winning streak started up again.”

Added junior Devonte’ Graham, who scored 17 points but coughed up a game-high four turnovers in the first matchup with WVU: “Definitely a big game for us. We gotta try to get that revenge. We’re gonna get hype for that game. Our last game at home we took an L so we gotta come back and play hard. I know the crowd’s gonna be juiced up and energized.”

The Jayhawks have not lost to West Virginia at home since the Mountaineers joined the Big 12, winning in Allen Fieldhouse during the past four seasons by an average margin of 14 points. That includes an overtime thriller in 2015 and a 26-point blowout in 2013.

During that same time, however, KU is just 1-4 in games played at WVU, including this season’s 16-point loss in late January, making this showdown one of the more evenly matched Big 12 rivalries for Kansas in recent years.

It’s that fact, along with the fresh memories of this season’s first meeting, that Self is banking on to inspire a better effort against the Mountaineers this time around.

“Any time you get it handed to you and you get an opportunity to play that same team, that should be motivation enough and that’s certainly what happened the first time we played West Virginia,” he said. “I won’t even talk about the league race. I’ll just talk about playing West Virginia. Those guys don’t need the league race to be motivated for this deal. They beat us the first time, so that should be motivation enough.”