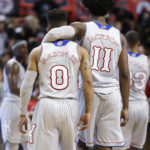 Kansas guard Josh Jackson (11) puts his arm around teammate Frank Mason III (0) during a timeout in the first half, Saturday, Feb. 11, 2017 at United Supermarkets Arena in Lubbock, Texas.

With 5.4 seconds left and the game tied at 79, KU coach Bill Self called upon his stellar freshman to come through. Jackson caught a pass at the top of the key before driving past Zach Smith and drawing a foul with just 2.8 seconds to play.

Though Jackson — a 54.3-percent free-throw shooter coming into the day — missed his first try, he delivered on his second, giving him a career-high 31 points before a desperation Keenan Evans 3-pointer from half court fell short for the Red Raiders, sealing the KU win.

Mason fouled out with the No. 3 Jayhawks (22-3 overall, 10-2 Big 12) up three on the road with 3:05 to play. He actually did plenty to give Kansas its 16th consecutive victory over Texas Tech, scoring 11 of his 12 points in the second half. But Jackson did even more, with 18 points, five rebounds and two assists over the course of the game’s final 20 minutes.

The 6-foot-8 forward and likely 2017 NBA lottery pick produced his fourth double-double of the past five games, going for 31 points and 11 rebounds, with four assists.

• The game turned when: The Jayhawks began knocking down 3-pointers.

Kansas started 0-for-5 from 3-point range before junior guard Devonte’ Graham tied it at 12 with just under 13 minutes left in the first half.

From there, KU’s perimeter players got much more comfortable, combining to knock down six of their next 10 from beyond the arc.

Sophomore backup Lagerald Vick connected on a 3-pointer for the first time since Jan. 24 at West Virginia — Vick was 0-for-6 combined from deep in the previous four games.

Svi Mykhailiuk, who opened the game 0-for-5 from the field and 0-for-4 on 3-pointers (including an air ball that the Tech fans let him hear about) began draining from long range, too. The junior from Ukraine nailed three 3-pointers in one six-minute span of the first half. His third make before halftime, off a Landen Lucas pass, gave KU its largest lead of the opening 20 minutes, 34-22, setting the visitors up for a 42-35 halftime lead on an afternoon when senior point guard Mason wasn’t himself.

Texas Tech took its first lead since the opening minutes with just more than nine minutes to play, when KU had only made a pair of 3-pointers during the first 11 minutes.

Mason’s first 3-pointer of the game — and KU’s first in almost seven minutes — cut the Red Raiders’ lead to one with 7:28 to play. The shot helped ease some of the Jayhawks’ worries in a tight game.

A few minutes later, Mason spotted up on the left wing to knock down another 3-pointer, courtesy of a Jackson offensive board and kick out, giving KU a 73-72 lead.

On KU’s first possession of the game, Jackson went ahead and announced his presence as the most athletic presence on the floor — as if anyone needed a reminder.

When Mykhailiuk missed KU’s first attempt of the matinee, Jackson came soaring in over the Red Raiders (16-9, 4-8) for a two-handed follow slam.

Not only did Jackson punctuate the game’s first points a day after his 20th birthday, it was just the start Jackson needed. The freshman phenom went on to score KU’s first six points, while the team opened up 3-for-9 from the floor, with Jackson a perfect 3-for-3.

The likely one-and-done wing from Detroit hit double figures in scoring before halftime and contributed 13 points, six rebounds and two assists in the first 20 minutes.

Believe it or not, Jackson opened his second-half scoring in similar fashion. When Mason couldn’t get a left-handed, contested layup to drop, Jackson took off from behind the play on the weak side and threw down an even more ferocious two-handed putback.

• Defensive highlight: This game wasn’t decided until the final minutes, and Texas Tech shot close to 50 percent much of the afternoon. So this category goes to some of the crunch-time stops.

With KU leading by three and more than three minutes left, Lucas and Graham teamed up to contest a Niem Stevenson layup attempt, forcing a misfire before Mason secured one of his five boards.

With the game tied at 79, Jackson stole the ball on the perimeter from Stevenson — though he missed the front end of the ensuing one-and-one.

Graham secured the most important defensive rebound of the game, with 17 seconds left, following an Aaron Ross missed 3-pointer.

• Key stat: Free throws. This victory would have been much easier for KU if the Jayhawks could’ve helped themselves out at the charity stripe more often.

The last and most important one of the win dropped from Jackson, but Kansas made just six of 10 in the second half and 12 of 19 in the game.

• Up next: The Jayhawks will be back in Allen Fieldhouse Monday for a massive Big 12 showdown with West Virginia (8 p.m., ESPN) after picking up back-to-back road victories this week.