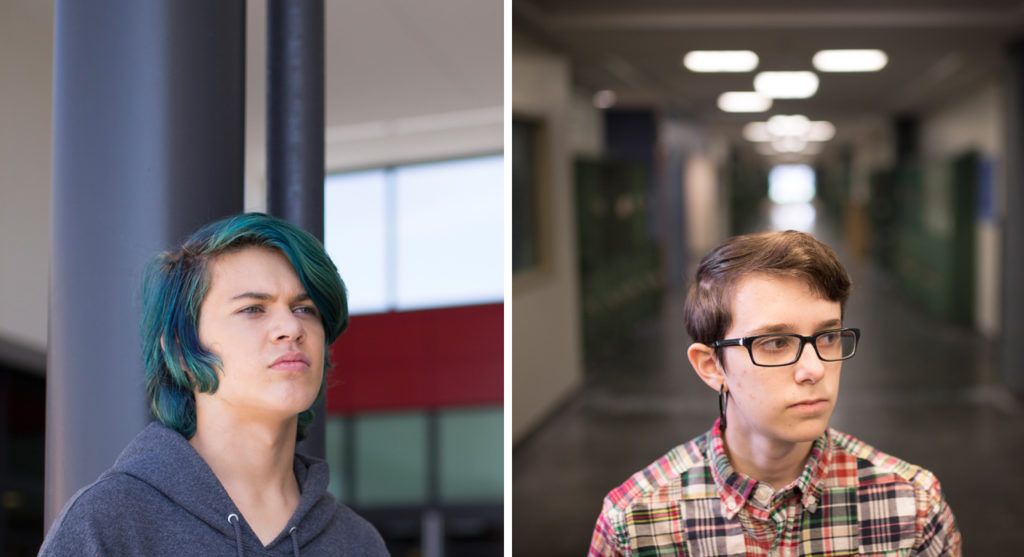 Lawrence High School sophomore Etana Parks, left, and Free State senior Lane Weis are transgender students in the Lawrence school district, which has been looking at issues facing LGBT students amid ongoing discussions at the state and national levels.

Lawrence High School student Etana Parks is expressive. Her hair is dyed aqua and she talks openly, a carrying voice accompanied by wide gestures. Next school year, though, Parks, who was born male, is afraid of being noticed.

When she begins her sophomore year in August, it will be the first time that Parks will present herself as female.

“I think I’ll get a lot of criticism next year, because there aren’t that many trans women in the school,” Parks said, noting that transgender males seem to be more common. “So I’m just going to be going to school like, ‘Ignore me, please.'” 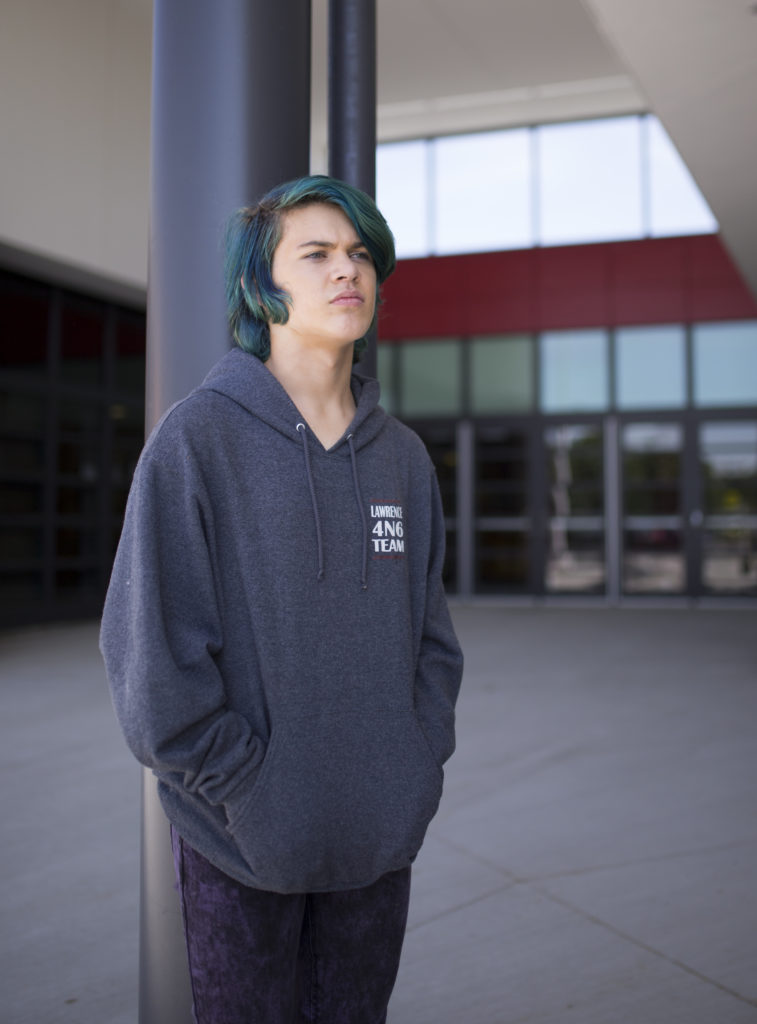 How school districts address transgender students, however, has recently been a focus of attention on the national, state and local levels.

Last month, the U.S. Departments of Justice and Education issued guidelines directing all public schools to allow transgender students to use facilities and participate in school activities consistent with their gender identity, including restrooms, locker rooms and sex-segregated sports. The guidelines also say school staff should use pronouns or names that correspond with a student’s gender identity.

Opponents of the federal guidelines say that allowing transgender people to use whatever bathroom they identify with creates safety and privacy concerns for others. Kansas Attorney General Derek Schmidt has said that his office will join a multistate federal lawsuit filed in Texas challenging the new guidelines, an action encouraged by some state lawmakers.

On June 1, the Kansas Senate passed a resolution opposing the new federal guidelines. Senate President Susan Wagle, R-Wichita, was the chief sponsor of the resolution. Wagle said school districts in her area had concerns that the guidelines would lead to boys claiming to be transgender girls in order to have access to girls’ restrooms and locker rooms, allowing them to see and possibly even touch girls who are undressed.

The resolution had 30 other co-sponsors, including Sen. Steve Fitzgerald, R-Leavenworth, who said the the new federal guidelines were part of a radical political agenda that he feared would lead to the destruction of Western civilization. During a discussion on the Senate floor, Fitzgerald described transgender identity as a form of insanity.

“You’re either male or you’re female, and it’s not changeable,” Fitzgerald said. “It’s reality. Inability to deal with that reality, or to recognize that reality, is disoriented, and can be disoriented to the point of insanity.”

The Kansas State Board of Education has not come out with an official response to the guidelines yet, and is expected to resume a discussion about transgender issues when it holds its regular monthly meeting June 14-15.

On Monday, the Lawrence school board will review recommendations from the district’s LGBT task force. The district has been looking at issues facing LGBT students for the past year, and the task force report will include several topics related to LGBT students, such as the use of restrooms, locker rooms, staff training and student awareness.

School board president Vanessa Sanburn said the district is comfortable following the federal guidelines and that her hope is that they won’t be asked to do anything other than that by the state board of education or the Legislature.

“So we have a lot of different potential guidance that we’re given and then we have to figure out at a local level, ‘OK, who do we have to listen to, what does that have to look like here?'” Sanburn said.

Not a recent issue

Though the concept of being transgender may have been drawing more attention recently, Parks has been dealing with it as long as she can remember. As a child, Parks said she would pray before bed to become a girl overnight, waking up disappointed each time. As she got older, Parks said she tried to accept her gender.

“For a long time, I thought that I would have to settle for that,” Parks said. “But it wasn’t until I found the trans community that I was like, ‘I need to embrace my true self, that’s something that needs to happen.’ I really just need to do this for myself, not for anyone else.”

Three years ago, Free State senior Lane Weis was in a similar position. Weis, a transgender male, said that most people were “pretty accepting” when he came out as transgender, including his family, friends and teachers and staff at Free State.

“Since freshman year, I’ve been presenting as male full time and going by male pronouns and the name Lane rather than my birth name,” Weis said. “It had been like a year before that when I realized I was transgender, and I decided freshman year was as good a time as any to come out, just because it was sort of a new start.”

At Free State, Weis got a key from administration in order to use the single-occupancy bathrooms at the school. Weis said that setup is a compromise, one preferred by his parents, and that ideally he would use a gender neutral or men’s restroom. 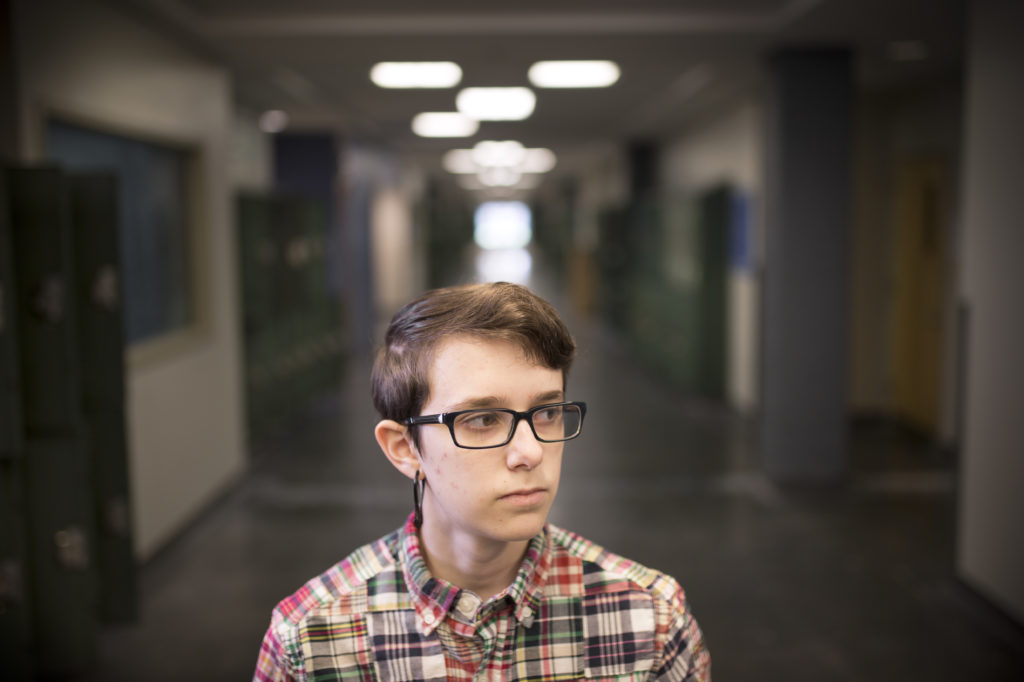 “I would much rather use the one that matched my gender identity, because it would be safer for me and I’d receive less comments by going into that one than I would going into the women’s bathroom,” Weis said. “When I have used the women’s bathroom in the past, people are like, ‘Oh, are you in the wrong bathroom?,’ and I want to say yes, but I just want to go about my business.”

Parks began transitioning in December, which, for her, includes taking female hormones. Transitioning while a high school student, though, isn’t easy. Use of bathrooms, locker rooms, gender pronouns and participation in sports are all issues that Parks knows she’ll have to navigate. When Parks began her transition, the first of those was bathrooms.

“Last (school) year, I wouldn’t drink any water, because I didn’t want to use the restroom,” Parks said. “It’s too scary to use the restroom.” But Parks said that tactic left her not feeling well physically, dry-mouthed and lightheaded when they had to run in gym class.

As far as some of the concerns raised by state lawmakers regarding transgender women using bathrooms and locker rooms, Parks said they just aren’t rational.

“Trans women and trans men have changed with you your whole life, you just didn’t know that, because it never occurred to you,” Parks added. “Being transgender was always looked down on, but it’s fear that’s raising it to the height it is.”

Weis said that transgender women definitely encounter more resistance when it comes to using the bathroom, and that he thought a lot of the issues are being exaggerated and twisted in different ways.

Parks also said that having gender-neutral bathrooms would likely be the best option for students in the midst of transition or for students who consider their gender to be fluid.

“There are people who just don’t fit inside the binary, so making gender-neutral bathrooms for them would seem like the school is accepting them in a world that right now doesn’t accept them,” Parks said.

Gender-specific activities also present a challenge. Parks participated in gymnastics and track in middle school, and said she is interested in running track again, but not if that means she’d have to run with the boys. Parks said she thinks that may be met with some criticism.

“People a lot of times think that girls are less capable than boys at things, and that’s not really true,” Parks said. “That’s something that needs to sort of be rectified.”

“All of this is really being figured out by society, and I don’t know that we have good answers that are clear and directive, quite yet,” Sanburn said.

A key part of transgender students’ transition is beginning to use a name and pronouns consistent with their gender identity. Weis began using his current name, Lane, when he was a freshman, along with the pronouns he, him and his. Weis said he emails his teachers before school starts to let them know; for the most part, his teachers have been accommodating.

“I have had some trouble with a couple of teachers in the past that are like, ‘I don’t really understand this and I’m not going to do it,'” Weis said. “But there’s nothing you can do about people like that. I didn’t feel like it was a big enough issue to go to the administration about it.”

Next year, part of Parks’ transition will mean she has to tell teachers that she no longer goes by her birth name, which is what is on file in the district’s online attendance and record-keeping system, Skyward. Parks thinks it would be helpful for teachers and substitutes if there were a way to notate names and pronouns in Skyward, but she plans to address it privately with teachers.

“I probably want to talk to them before class even starts and say, ‘Could you say this name instead of that name? That’d really help me out,'” Parks said. “I really don’t want to be exposed to everyone hearing that.”

In addition, Parks said she would like to see more guidance and training for teachers, so that they know it is not OK to refuse to use the names and pronouns that transgender students use for themselves.

“Training would really help,” Parks said. “So in case there’s a trans student in your class, this is what you do. And tell (teachers and staff), if you don’t do this it’s unacceptable and you should be reported to the administration for doing that because it’s harmful behavior.”

Weis said he was pleased when the federal guidelines came out and that they are a good way to make sure transgender students have the same rights as other students. In addition, Weis said the guidelines also stimulated more conversations about transgender students, which might help as the state and local school board get ready to discuss the issue.

“I’m just really hoping that it turns out positive and people are more willing to understand why a transgender person would want to use the bathroom that’s associated with their gender,” Weis said. 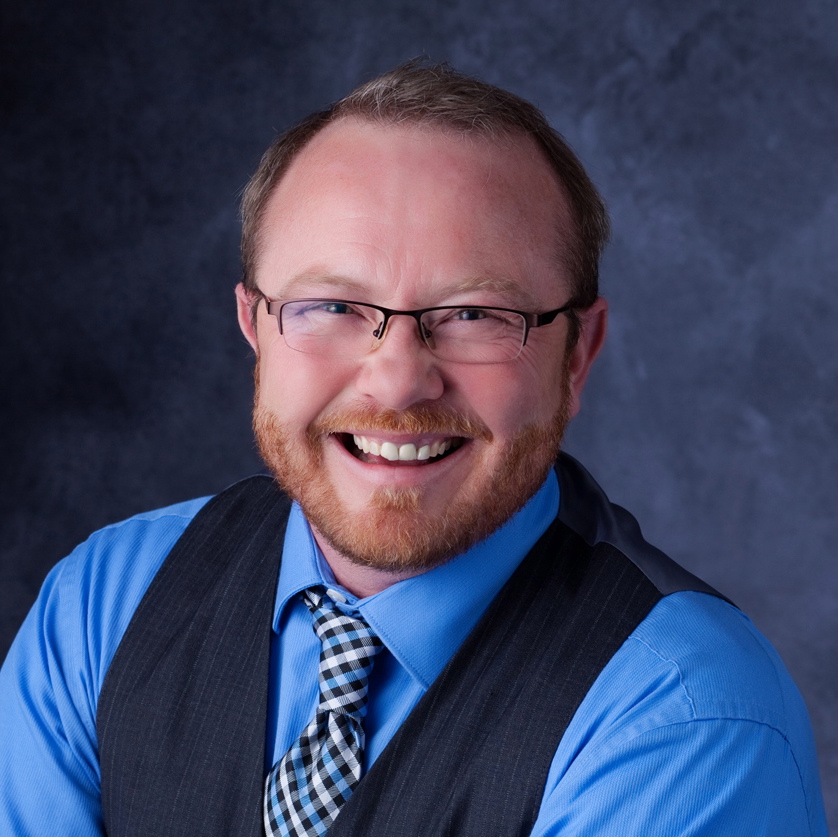 Lawrence resident and transgender advocate Jay Pryor is a member of the task force. Pryor, 50, is a transgender man and said it’s hard for him to imagine having been able to come out in high school.

Pryor said he thinks it’s fantastic that students are able to come out earlier and that the district is addressing issues facing all LGBT students. Though at the same time, Pryor said he recognizes that there are many states and cities that are not having such discussions.

“There are still places, places in Kansas, for example, that would never entertain this conversation and that’s again why I’m super grateful that we have a town that’s open to that and a board that’s interested and willing to listen,” Pryor said.

The task force report will be available to the public and school board members on Monday, and Sanburn said she is looking forward to reviewing it.

“I am interested in hearing the results for the LGBT task force and any kind of recommendations that they have for how we might better meet student needs,” Sanburn said.