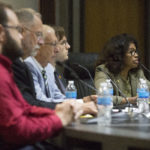 About 30 people turned out for the legislative portion of Sunday’s forum, sponsored by the Voter Education Coalition. It featured all but one of the House candidates whose names will appear on primary ballots in Douglas County Aug. 2.

And in the 42nd House District, which includes portions of Leavenworth and eastern Douglas counties, challenger Jim Karleskint, a former Holton school superintendent, set himself apart from Rep. Connie O’Brien, who did not attend Sunday’s forum, on most issues including tax policy, school funding and Medicaid expansion.

But in the 44th House District, which covers most of Lawrence west of Iowa Street, the biggest differences between the candidates were age and style. There, Democratic Rep. Barbara Ballard, 71, is seeking her 13th term in the House and is pitted against 27-year-old challenger Steven X. Davis.

“I’m running on a platform of preserving Second Amendment rights, preserving the rights of the unborn, preserving personal privacy rights and helping defend education,” Pierce said in his opening remarks.

Pierce also ran against Sloan in the 2014 GOP primary, losing 24-76 percent. But he said some of his positions have evolved since then, including those on tax policy, and he now favors lowering the state sales tax on food. But he said he does not support repealing the controversial tax cuts enacted in 2012 and 2013.

Describing himself as “vehemently pro-life,” Pierce said he opposes legalized abortion and he supports a broader form of school vouchers that would provide each student with a certain amount of money and allow parents to decide where to send their children to school.

Sloan said he considers abortion “a terrible form of birth control” but said the U.S. Supreme Court has determined what the Constitution allows, and he supports those Supreme Court decisions.

“If re-elected, I will continue working on funding education at all levels, from pre-kindergarten through KU,” Sloan said. “I will continue my work protecting the state’s drinking water supplies, increasing the amount of renewable energy that’s generated here … and most importantly, I’ll continue working on responsible tax policies where equity and fairness matter, where everybody pays their fair share.”

Until this year, Sloan was chairman of the House Vision 2020 Committee, which dealt mainly with long-range planning issues. But House Speaker Ray Merrick removed him from that post after the 2015 session as punishment for leading the committee through hearings and proposing legislation to expand Medicaid under the federal Affordable Care Act.

Karleskint, who describes himself as a “fiscally conservative Republican,” said he was “appalled at the direction our state is going.”

“Our state is in a financial crisis due to the irresponsible experimentation of the tax experiments that have taken place under the (Gov. Sam) Brownback administration,” he said. “We do not have a balanced budget. We’ll likely be experiencing the largest tax increases in the history of the state of Kansas. We’re borrowing money and we’re taking money from transportation and we’re not spending it on roads.”

Karleskint is challenging Rep. O’Brien, who was first elected in 2008. O’Brien did not attend the forum, but she was among the 64 House members who voted in favor of the tax cuts that Brownback championed in 2012, and she said at another forum July 5 that she believes those tax cuts are benefiting the Kansas economy.

O’Brien also said at that forum that public schools already receive more than half of the state’s general fund budget, and that raising taxes would only result in schools getting more money.

But Karleskint, who was a teacher and principal at a Catholic high school in Leavenworth County before he became superintendent of public schools in Holton, said he believes school funding is the most important issue facing the state.

“The issue is, we need to deal with the fact that we are not taking care of the schools the way we need to,” he said. We need to keep the courts out of the business of schools, but in doing so, we as a Legislature have to work to fund schools in a proper way.”

On other issues, though, Karleskint indicated that he shared some of O’Brien’s positions. He described himself as pro-life and a supporter of Second Amendment gun rights, although he said he believes training should be required before obtaining a permit to carry concealed weapons.

The race in the 44th House District features more of a generational difference than a philosophical one.

Barbara Ballard, who first moved to Kansas in 1980, served as dean of students and director of the Emily Taylor Women’s Resource Center at Kansas University until 2004. She is now director of civic engagement and outreach at the Dole Institute of Politics on the KU campus, and in the Legislature she chairs the House Democratic Caucus.

Steven X. Davis grew up in Leavenworth County and holds a bachelor’s degree in mathematics. He now lives in Lawrence working as a freelance writer, copy editor and math tutor.

He said he also would like to serve on the House Ethics and Elections Committee to reform recent voter registration laws that have resulted in numerous state and federal lawsuits.

Ballard, who served eight years on the Lawrence school board before running for the Legislature in 1990, said she wants to continue working to fund K-12 and higher education, as well as social services.

But the two parted slightly on the subject of allowing people to carry concealed weapons in public buildings. That was a law passed in 2013, although it gave city, county and higher education institutions a four-year exemption to give them time to develop security plans. It goes fully into effect on July 1, 2017.

“First of all, I’d like to see local control of that,” Davis said. “I would also like to see licensure restored. I think we had a model system a few years ago. I think this new system, the so-called ‘constitutional carry’ (which means no permit is required to carry a concealed handgun) benefits just a handful of unscrupulous gun salesmen.”

Ballard said she opposed the idea of allowing concealed carry in public buildings and that she will push for continuing to exempt higher education facilities.

The official roll call vote from 2013, however, shows Ballard voted in favor of the final bill that passed that year.

Asked about that vote after the forum, Ballard said there were several votes on concealed carry proposals that year and that she opposed most of them. She said she voted in favor of the final version only because it contained the four-year exemption for higher education facilities.