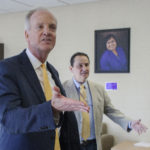 U.S. Sen. Jerry Moran (R-Kan.), left, is welcomed at Haskell Indian Nations University by Stephen Prue, Office of the President Executive Assistant, right, during a visit on the Lawrence campus Friday, Jan. 29, 2016. Moran also made a stop early in the day for a town hall meeting in Eudora.

U.S. Sen. Jerry Moran spent part of Kansas Day in Douglas County on Friday, with a town hall in Eudora as well as a stop at Haskell Indian Nations University.

The visit to Haskell was partially for a meeting with Stephen Prue, executive assistant to University President Venida Chenault, in preparation for Haskell’s visit to Washington, D.C., next month.

Prue said a group of students and faculty will visit the nation’s capital for the American Indian Higher Education Consortium 2016 Winter Meeting from Feb. 8-11.

Another reason for the visit, Moran said, is to reconnect on the issue of the university’s governance.

Chenault told the Journal-World in October that the university is looking at increasing autonomy and authority as a university that is federally funded. The university’s Board of Regents — which is technically an advisory board rather than a governing body for the school, Chenault said previously — formally resolved to move toward more autonomy from the federal government, including studying the possibility of becoming federally chartered instead of federally operated.

Moran said Friday that he has spoken with graduates and “those who are interested in the well-being of Haskell.”

“I have indicated that I want to work cooperatively with Haskell to try to get whatever legislation might be useful to them in that autonomy and to increase their chances of having a greater level of private support from across the country,” he said. “(…) We’ve had a long-running conversation over the last several months with Haskell about trying to reduce the bureaucracy.”

As a senator, Moran said, he has tried to increase his involvement in tribal issues across the country. He is also a member of the Senate’s Committee on Indian Affairs.

“A significant part of what I’m involved in, in my conversations with tribes but also legislatively, is trying to make sure that the sovereign rights of Native Americans are protected,” he said. “Just like other folks outside Washington, D.C., the tribes see a significant increase in the role the federal government is trying to play in tribal affairs.”

Moran also said that if the issue of autonomy comes to legislation, he will try to persuade his colleagues in the Senate to be supportive, or “knock on the doors” of the Bureau of Indian Affairs if it is an internal issue.

“If we can work with Haskell to find ways that they are better able to have more flexibility, to raise private funds, to make decisions about what’s in their best interest, I think that’s a good thing,” he said. “I want to make sure the commitment of the federal government is kept, but if there’s better ways to deliver the resources and the services, I’m all for that.”

Moran said the Eudora town hall touched on topics such as the role of federal government, the job climate, the Affordable Care Act and what might replace it when a new president is elected — “normal conversations that Kansans have.”

“This was my first town hall meeting as a senator in Eudora, and it was pleasing to be thanked for paying some attention to the citizens who live in that part of Douglas County,” he said. “It was a good conversation.”