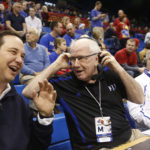 Radio broadcaster Bob Davis gets into conversation with color commentator Greg Gurley prior to the Jayhawks' tipoff against Georgetown on Saturday, Dec. 21, 2013 at Allen Fieldhouse. Davis is in his 30th year of broadcasting Kansas basketball games. At right is technician Bob Newton.

Bob Davis, the voice of Kansas University football and men’s basketball for more than three decades, has been named 2015 Kansas Sportscaster of the Year by the National Sportscasters and Sportswriters Association.

This is the 14th time Davis has received the honor.

Davis has announced he will retire following the 2015-16 basketball seasons. He started his career with the Jayhawk Radio Network in 1984.