Jason Thoren: A football coach who shows his players more than football videos 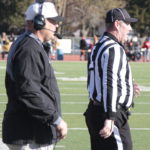 Baker defensive coordinator Jason Thoren watches from the sidelines during the Wildcats' 44-21 win over Sterling Saturday at Liston Stadium in the first round of the NAIA playoffs. Thoren — who was a standout linebacker at Lawrence High and Kansas — has the Wildcats holding its opponents to 18.25 points per game.

A linebacker at Kansas who led the team in tackles as a sophomore in 1994 and but for knee injuries cheating him of some games likely would have done so two more times, still says “we” when referring to Kansas.

“You remember that game,” Thoren said. “It was like we were playing with seven, eight men on the court. We’re stealing it, blocking ’em, running. We about ran ourselves out of gas and they came back on us. It was really cool for these kids because those players from ’08 were their childhood idols. Fast-forward eight years later. I was wondering would they get into it. Even our out-of-state kids were into it because they were saying, ‘Oh, yeah, that’s the first time I ever really heard of Kansas.’ They were all into it.”

Thoren explained why he had his players take a break from football film to watch basketball.

Thoren became excited all over again just thinking about that Final Four game.

“Bill Self, I’ve got a lot of respect for that guy,” Thoren said. “I just love watching his teams. He’s a great, great coach. Obviously, you talk about his recruiting and his ability to coach basketball, but to keep those kids mentally locked in like that year after year after year, he’s a great one.”

Baker (14-0) faces St. Francis (12-1), from Fort Wayne, Ind., in the NAIA national-title game Saturday in Daytona Beach, Fla., at 5 p.m. Nobody will ever know to what extent watching freshman Cole Aldrich outplay national player of the year Tyler Hansbrough motivated Baker, but it certainly didn’t hurt. The Wildcats overcame a 17-point deficit with five minutes remaining in their national semi-final victory.

Thoren plans to mix in one more non-football film session, this time a rerun of what he showed them in mid-season. Darrick Smith, a senior for Baker in 2013, sent Thoren a 13-minute video about Secretariat. It included the horse’s running of The Belmont Stakes, which it won by 31 lengths to clinch the Triple Crown. Smith remembered the impact watching that race had on him when Thoren showed it in 2010.

“If you know you’re good, OK, then what are you striving for? Are you striving to be the best or are you happy with being good? That’s where the Secretariat thing came in. If you watch that race, that horse knew it would win the race, it was just by how much. It wanted to put on a show.”

This week, Thoren said, he will talk about Sham. Who? Exactly. Nobody remembers who finished second.

“Sham was the other horse,” Thoren said. “That was the rivalry. Sham beat Secretariat in a race (Wood Memorial) right before the Triple Crown started. Secretariat knew. The horse was mad about it.”

Sham finished second to Secretariat in the Kentucky Derby and Preakness, battled the great Secretariat well into the Belmont, but had its spirit broken and faded all the way to last.

Thoren is open to unconventional motivational tactics to prepare his players, but to hear him tell it, evaluating recruits is a far more simple game.

A three-year starter at KU, including on the 1995 10-2 team, Thoren played his first three seasons for Glen Mason and said he draws on his teachings frequently.

Thoren moved from Eudora to Lawrence early in elementary school.

“Adam Green was my next-door neighbor, first kid I met when I moved,” Thoren said of Lawrence High’s defensive coordinator and assistant baseball coach. “I remember thinking, ‘Are all kids in Lawrence going to be this good? I thought I was good. Now I’m not.’ Turns out he was just a great one. Adam Green never played (organized) football until junior high, but we all knew he was one of the best players you’ll ever see. He got into high school and he was hell on wheels, two-time all-state tailback.”

Thoren looked back on his days playing full-speed tackle football with no pads or helmets at various fields in the Deerfield area and rattled off the names of some of his buddies back then: “Adam Green, Shane Robinson, Brad Romme, Brad Harker, Joe Bob Clements. It was just a great crew.”

Grossner and Thoren have turned down opportunities to move on from Baker during their 13 years together. Thoren explained why.

Grossner added, “Great kids. Just watching them, what happens after they leave here. I think we have (at least) seven doctors.”

Thoren said he brought a little bit of every coach he played for when Grossner hired after he had spent time as a graduate assistant under Mason in Minnesota.

Thoren’s name will surface when Lawrence High starts its search for a head coach to replace Wedd, who announced recently that 2017 will be his final season.