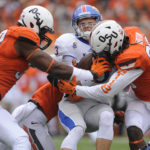 Stillwater, Okla. ? Seven days after setting a handful of freshman passing records, Kansas University quarterback Ryan Willis was reminded of just how much he still has to learn during the Jayhawks’ 58-10 loss at Oklahoma State.

“I think he had a rough day,” KU coach David Beaty said of his quarterback. “He did a few good things, but I thought he overthrew a bunch of guys, I thought his poise wasn’t where it had been.”

A big reason for that was the pass rush and chaos created by Oklahoma State’s defense. Willis was under duress all day, from the opening snap of the game to his last, and he completed just 39 percent of his passes (12 of 31), threw two interceptions and was sacked twice and hit a ton.

Despite the beating, Willis’ teammates, who spoke on his behalf because KU’s freshmen are not made available to the media, came away impressed with the way he fought through it.

“He was cool,” said senior wideout Tre’ Parmalee of Willis. “I was surprised. He doesn’t really get flustered. He’s definitely a confident kid and he’ll keep getting better each week.”

Added Beaty: “Probably the biggest positive I will take out of this game is the way that young man handled today. As he would come off the field we used every single moment as a teachable moment. He’s a freshman. Obviously. And there’s a lot of things to learn in hostile territory like today, particularly against a front as good as they were.”

Willis’ best moments of Saturday came late in the first half, with KU trailing 35-3. On a third-and-eight play from his own 40, Willis evaded the OSU rush, stepped up in the pocket and hit Jeremiah Booker with a 27-yard touch pass for a first down. On the very next play, with the Cowboys on their heels, Willis fired a bullet to Steven Sims Jr., who caught it cleanly and raced 33 yards to the end zone for KU’s only touchdown of the day.

“I loved his demeanor,” Beaty said of Willis. “He kept learning, he kept paying attention.”