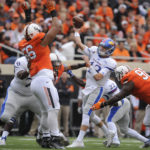 Kansas quarterback Ryan Willis (13) throws up the field as Oklahoma State defensive tackle Vincent Taylor (96) comes in for a hit during the second quarter on Saturday, Oct. 24, 2015 at T. Boone Pickens Stadium in Stillwater, Okla.

The Kansas offense never had a shot at developing any rhythm, as true freshman Ryan Willis fought off constant harassment from the OSU front and completed just 32 percent of his passes through three quarters, before the Cowboys (7-0 overall, 4-0 Big 12) emptied their bench.

Oklahoma State jumped out to a four-touchdown lead early in the second quarter, forcing KU away from its running game and making Willis drop back and face pressure time after time.

Willis, who threw a touchdown pass to Steven Sims Jr. and a pair of interceptions, finished the game 12-for-31 through the air for 191 yards, and played the entire game.

While Kapil Fletcher, Joe Dineen and Daniel Wise came up with sacks early on for KU (0-7, 0-4) in the loss, OSU quarterback Mason Rudolph mostly had no issues. The starter completed 20 of his 26 throws for 305 yards and a TD, and was resting on the bench by the third quarter.

The Jayhawks return to Memorial Stadium next weekend, to face Oklahoma.

12:10 — J.W. Walsh 3 run. Ben Grogan kick. Oklahoma State forced Kansas into a three-and-out on the game’s first series and then marched 70 yards in eight plays, with three plays of more than 20 yards eating up most of that real estate. The Cowboys’ initial scoring drive took 2:07. (OSU 7, KU 0).

2:47 — Walsh 1 run. Grogan kick. After stuffing KU’s offense for the third time in a row, OSU took advantage of great field position and drove 47 yards in 10 plays and 4:09 to take a two-score lead. The drive, which again featured Walsh handling quarterback duties in the red zone, was kept alive by a fourth-down conversion from QB Mason Rudolph to wide receiver David Glidden. (OSU 14, KU 0).

14:50 — Miketavious Jones 13 blocked punt. Grogan kick. Another stalled KU drive ended with a Ryan Willis sack on the final play of the first quarter. On the first play of the second, Matthew Wyman’s punt was blocked and returned for a TD by Jones, who had to hold his breath while officials reviewed it before confirming the score. (OSU 21, KU 0).

8:41 — Nick Bartolotta 40 field goal. Kansas owed its first scoring drive of the day to a sensational catch and run by senior receiver Tre’ Parmalee, who caught a short pass from Willis on third and 10 and raced 46 yards to set up the kick. (OSU 28, KU 3).

7:17 — James Washington 8 pass from Mason Rudolph. Grogan kick. The Cowboys answered KU’s first score with a lightning-fast touchdown drive starring sophomore wideout James Washington, who caught two balls for 51 yards on the drive, including the TD grab, which he ripped out of the air one-handed. The drive covered 70 yards in four plays and 1:17. (OSU 35, KU 3).

3:43 — Steven Sims Jr. 33 pass from Ryan Willis. Bartolotta kick. After going nowhere on the first couple of plays of the drive, Willis stepped up and hit Jeremiah Booker for 27 yards on third down. On the next snap, Willis quickly pushed the ball out to Sims, who sprinted past the OSU secondary for the score. The drive covered 62 yards in four plays and 1:15. (OSU 35, KU 10).

14:10 — Walsh 4 run. Grogan kick. Oklahoma State took the opening kickoff of the second half and wasted little time putting more points on the board. Three plays and 50 seconds was all it took for the Cowboys to march 35 yards for their sixth TD of the day. (OSU 42, KU 10).

7:25 — Lacy 38 pass from Walsh. Grogan kick. The OSU seven-on-seven scrimmage continued midway through the third quarter when Walsh, who normally just fills in for Rudolph in the red zone, tossed his second TD of the day to Lacy to cap a seven-play, 72-yard drive that took 3:10. (OSU 56, KU 10).

4:55 — Tyler Ferguson 10-yard sack and safety. An OSU backup freshman defensive tackle, Ferguson got credit for a sack and two more points for the Cowboys when he chased after Willis in KU’s end zone. Willis rid himself of the ball before getting hit, but the incomplete throw didn’t get anywhere near the line of scrimmage, putting a miserable end to a three-play series. (OSU 58, KU 10).