Samantha Elmer, 33, of Lawrence, is charged with one count of taking her children out of the United States with intent to obstruct the lawful exercise of parental rights. Elmer was arrested Tuesday at the airport in Kansas City, Mo., when she returned with her children.

A criminal complaint filed in U.S. District Court in Kansas City, Kan., alleges that on Oct. 26 Elmer and her daughters, ages 9 and 11, boarded a flight from O’Hare International Airport in Chicago to Vienna, Austria, via Istanbul, Turkey. A week earlier, Elmer’s ex-husband and father of the two girls had filed for full custody in Johnson County District Court. The court had scheduled a hearing for the first week of November. Elmer also was scheduled for a hearing on felony theft charges in Johnson County District Court. 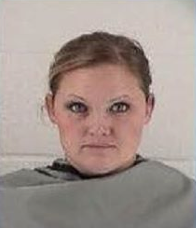 On Oct. 29, an officer of the Lawrence Police Department went to Elmer’s house in Lawrence to do a child welfare check. Investigators determined that Elmer’s daughters had missed the past six days of school. They learned that Elmer had been driving a rented vehicle and had dropped the vehicle off at O’Hare airport before boarding the flight to Austria.