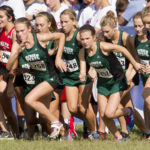 Last year, Free State High sophomore Emily Venters won individual titles in the Sunflower League, at regionals and at the Class 6A state meet. All she was missing was a victory in Kansas University’s Rim Rock Classic at Rim Rock Farm.

She changed that on Saturday, pacing the entire field for a victory in the girls’ 5K race. Her first-place finish, along with junior Claire Sanner finishing fourth, helped Free State’s girls cross country team take second place in the team standings.

Venters, who took sixth in her race at the Rim Rock Classic last year, broke out to an early lead and never looked back.

“I kind of forgot about all the hills when I was racing, but I just pushed through it and just, like, fought the whole time,” Venters said. “I never let up. At first, I wasn’t going to go out — I didn’t want to be the leader. But I had to, and I felt it. Then I just kept pushing and was like, ‘I can’t let up now.'”

Venters, who missed last week due to a toe injury that she feared was a stress fracture, has won all three races she has entered this season.

Senior Thomas Becker also set a personal record when he finished 38th with a time of 17:02.9. He topped his previous best time by just more than four seconds.

“It’s our home turf,” Becker said. “I’ve run out here nine times now. That really helps a lot. You get used to it. You feel like you’ve got to do well here.”

“It wasn’t too bad. I just wish I could have done as well as I did last year at league,” Pederson said.

Lawrence’s girls team took 25th among 26 teams in the girls “Crimson” 4K, but senior Shelby Ward ran a personal-best time of 18:49.6 to top the Lions with her 115th-place finish.

“We did run better,” LHS coach Brian Anderson said. “They just seemed to feel better today. Their minds were into it better. I don’t know. We worked them hard this week, told them, ‘Yeah, you can do this.’ So they just stepped up.”