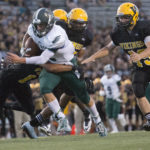 Free State High senior Joel Spain was one of the smaller players on the field during the football City Showdown on Friday, but he made some of the biggest plays.

Spain scored the game’s first touchdown, hauling in a 21-yard pass with a Lawrence High cornerback draped around him and with a hand in his face. Later, he had a long 31-yard punt return that put the Firebirds in good field position, which later led to a field goal.

On defense, Spain knocked down a few passes, made a few tackles, and nearly had an interception. The only thing he didn’t do was sell popcorn in the stands.

For a player who’s been on Free State’s varsity roster for three seasons, his teammates and coaches expect nothing less.

Spain, a 5-foot-9, 165-pound receiver and cornerback, doesn’t strike a lot of fear into opponents with his size. Yet he’s eighth in the Sunflower League with 111 receiving yards this season on eight receptions. His five interceptions from 2012-13 ranked second in the league.

He wants to line up against the best cornerbacks and receivers in the league, and won’t back away from any of them.

“I do like the big spotlight, definitely,” Spain said.

He tracks down fade passes like he does with baseballs in centerfield, his better sport, and can use his elite speed to blanket opposing receivers.

Spain also brings plenty of experience and expertise to both sides of the ball. His teammates aren’t afraid to take advantage of it.

“If I don’t know the play, he usually does,” junior quarterback and safety Bryce Torneden said. “So if I ever have problems with the play or anything, I know I can always rely on him to know it.

“He’s got a lot of experience,” Torneden added. “He’s a very smart player. I know I wouldn’t want to play against him just because how smart he is and he’s a playmaker.”

Spain also lends advice on defense, helping outside linebacker Drew Tochtrop, who usually lines up on his side, and helps senior receiver and cornerback Andrew Keating with game plans.

During a Week One victory over Shawnee Mission West, Spain had a touchdown catch and interception in the end zone in the final five minutes, leading Free State to its first victory of the season.

“Joel always comes in clutch,” Keating said. “It’s just something that we expect from him now.”