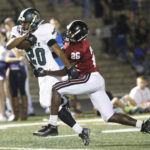 Free State High football players didn’t expect it to be easy against Lawrence High. Not in the City Showdown, where the rivalry brings out the best from both schools.

But the Firebirds’ defense shined against Lawrence High on Friday night, and the offense warmed up after a slow start in the first half for a 31-12 victory at LHS.

When the Firebirds get rolling, it’s a scary team that mixes speed and strength on both sides of the ball. They also proved they can bounce back from adversity.

A quick LHS (1-2) touchdown in the third quarter cut the score to 10-6, and the Firebirds (2-1) responded with three touchdowns for 21 unanswered points to put the game away and take most of the suspense out of the final quarter.

“I’m extremely happy,” FSHS senior lineman Scott Frantz said. “Our defense played really well. Our offensive line struggled a little bit early, but we got it together. They tossed some things out that we weren’t expecting them to do early. But once we got that figured out, it went really well from there on.”

Free State’s biggest play on offense in the first half came late in the first quarter, when junior quarterback Bryce Torneden found receiver Joel Spain on a fade route down the left sideline and into the end zone for a 21-yard reception, after Spain outjumped the Lions’ defenders.

“They had it covered pretty well,” said Spain, noting the team works on jump balls each day in practice. “I kind of ran a different (route) — I found an open space. Bryce did a great job of finding me open and giving me a chance to catch the ball.”

Meanwhile, it took until Lawrence’s final drive of the first half to get a first down, when junior quarterback Alan Clothier lowered his shoulders to convert on a third-and-two. Clothier then ran for two more first downs, giving LHS momentum into halftime, despite trailing 10-0.

On the second play of the second half, LHS junior running back JD Woods dashed for a 71-yard touchdown.

“We weren’t moving the ball at all in the first quarter and most of the second quarter,” said Clothier, who ran for 44 yards on 13 attempts. “I just knew I needed to do something to keep this team pumped and going, get them down the field.”

The Lions’ defense looked poised to give their offense a chance to take a lead with a three-and-out, but Woods muffed a catch on a punt, and the fumble was recovered by Free State sophomore Zion Bowlin.

The Firebirds took advantage of the extra possession and turned it into a three-yard plunge into the end zone for senior running back Joe Lane.

On the Firebirds’ next possession, junior running back Khaury El-Amin ran for 42 yards on five carries before Torneden, who ran for 62 yards on 19 attempts, sprinted past defenders on an option play for an 11-yard touchdown.

After the defense forced another punt, El-Amin shook a few defenders and sprinted for a 42-yard touchdown.

They were El-Amin’s first varsity carries after spending the last two weeks on junior varsity and the scout offense and defense in practice.

“I was pretty happy,” said a smiling El-Amin, a transfer from St. Joseph (Missouri) who finished with 103 yards on 13 carries. “I didn’t get a lot of varsity time these last two games, so I knew when I got out there, I had to do what I do and prove myself so I can play next game.”