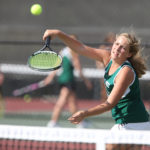 Free State's Taylor Hawkins sends a return over the net during a doubles match against Lawrence High on Tuesday, Sept. 30, 2014 at Lawrence High School.

Free State High junior Caitlin Dodd trailed Lawrence High’s Anna Birt by two games in the last match of the dual with both schools tied at four points each.

With bragging rights on the line, Dodd raced around the court, found spots to drop the ball on her returns and slowly rallied back.

Eventually Dodd forced a tiebreaker, where she avoided unforced errors and outlasted Birt, 9-8 (7-5).

“In the past I’ve always played singles for middle school,” Ali Dodd said. “So playing doubles is definitely a change, but it’s really fun with my sister. We’re like best friends.”

The Dodd sisters have played well alongside each other in doubles all season and Ali went straight to cheering for her older sister once her singles match was over.

Rachel Walters and Natalie Myers also had victories at No. 4 and No. 5 singles, respectively to help the Firebirds in their victory.

“It’s definitely a fun dual to have because of the whole rivalry,” said Caitlin Dodd, as a few girls wore purple ribbons in solidarity against racial intolerance after vandalism against both schools over the past few weeks and to show that the rivalry only exists on the court. “It’s just like fun to play them. It is exciting to win, but it’s always good competition.”

Lawrence’s Yelena and Anna Birt won at No. 1 doubles, while Kendall Pritchard and Erin Ventura combined for a victory at No. 3 doubles. Pritchard and Ventura also had the team’s lone victories in singles.

“We had a lot of people playing singles that usually don’t play singles,” LHS coach Chris Marshall said. “We were competitive. We had every shot to win it. I was hoping that one of the balls bounced our way, but obviously, Free State wanted it a little more today.”

Both schools will play in the Sunflower League meet at Olathe Northwest on Friday.