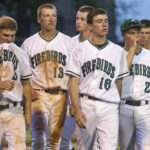 Free State players walk off the field after their loss to Washburn Rural, Wednesday evening in Topeka.

Topeka ? Free State High’s baseball players slowly streamed out of the dugout after the last out was recorded in the regional championship on Wednesday night.

Meanwhile, Topeka Washburn Rural’s players were jumping on top of each other in a dog pile on the pitcher’s mound.

The Firebirds did their best to be on the other side of the celebration but couldn’t overcome a six-run deficit in an 8-3 loss at Hummer Sports Park. They were held to just five hits and struck out 14 times against Washburn Rural starter Michael Singer.

“It’s been two years now back-to-back we’ve gone to the regional championship with odds in our favor. We just haven’t been able to produce,” FSHS senior Cameron Pope said. “It sucks, honestly.”

The Junior Blues (19-3) scored five runs during a two-out rally in the second inning. An error extended the frame, and they took advantage with a pair of walks and singles against Free State starter Parker Tietjen.

The Firebirds brought in junior Casey Hearnen to pitch with the bases loaded, and Washburn Rural senior Trenton McMaster drilled a three-run double into the left-center gap, giving the Blues a 6-0 advantage.

Free State (13-9) left the bases loaded in the third inning, after two-out singles from juniors Joel Spain and Cooper Karlin.

In the fourth, the bottom of the Firebirds’ order brought life back into the crowd and dugout. After an error and two walks loaded the bases with none out, freshman Jacob Pavlyak smashed a single to drive in two runs.

Senior Ryan Cantrell followed with a RBI single, but the Firebirds couldn’t do any more damage with the top of the order up as Singer struck out two and forced a pop fly to end the threat.

“Since we knew it was a chance to be our last game, we just had to keep fighting. That’s what we did,” Pavlyak said. “We tried to do it for the seniors. We just couldn’t finish.”

Singer, a lefty, worked ahead in most counts and had a curveball that was nearly untouchable, which he used to get most of his strikeouts.

The Firebirds only had one more hit for the rest of the game — a single from Spain in the seventh — as Singer struck out five of the six batters he faced in the fifth and sixth innings.

“His breaking ball was really good today,” Pope added. “He threw a lot (of breaking balls) for a strike. We were just off balance, really. He struck a lot of us out. Hats off to him.”

Free State’s offense shined in the second inning of the first round of regionals, during a 6-5 victory over Topeka High, scoring six runs on four hits. The rally was highlighted by an RBI triple from Zach Bickling, an RBI single from Pavlyak and a three-run double from Pope.

The Firebirds led 6-0 before Topeka High scored four runs in the sixth inning and added a run in the seventh, leaving the tying run on third base when Hearnen forced a ground ball to end the game.

“This is what we look forward to all year,” Hearnen said. “This is where the season is. Our whole goal at the end of the season is to take two (wins) and head home to state. We just didn’t get it done today.”