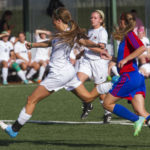 Free State senior forward Maddie Dieker gets past the Wichita South defense as she takes the ball in for her second goal of the first half during their regional soccer match, Monday, May 19, 2014, at FSHS.

Free State soccer senior Maddie Dieker is known for making crisp passes to her teammates and putting them in position to score goals.

With the way the Wichita South defenders were playing against the Firebirds’ forwards on Monday at FSHS, it was time for Dieker to move from the passer and become the scorer.

In the eighth minute of the match, the ball rolled toward Dieker on the left side of the box, and she drilled a goal over the outstretched arms of Wichita South’s goalkeeper.

The new strategy worked like a charm, as Free State’s girls soccer team created plenty of offense in a 4-0 victory in the first round of regionals.

Dieker, a University of Portland signee, added another goal in the 35th minute, dancing around a defender and firing a shot just inside of the box.

“Sometimes you just have to put your head down and get a goal, and not look for all the fancy passes,” Dieker said. “But it was nice to get one under the belt and then work more as a team after that.”

The Firebirds used their midfielders to create chances throughout the first half, with seniors Kaitlin Dunbar, Lexi Brady and Anna Craig just missing on shots. In the second half, they switched to finding their forwards sprinting down the pitch.

Senior midfielder Hadyn Hutchison made a beautiful cross from the right side of the box to the left, finding sophomore teammate Tori Karlin, who headed the ball into the back of the net to give the Firebirds a 3-0 lead.

“It was awesome,” said Karlin, who didn’t want to take credit away from Hutchison’s pass. “It was great, but it was really not my goal. It was a great ball.”

The Firebirds (11-6) outshot the Titans (7-9-1) on net, 24-4, and controlled the ball for most of the game. Free State defenders Olivia Hodison, Allix Ice, Hanna Heline, and Rosemary Newsome shut down every counter-attack and allowed goalkeeper Annie Hierl to relax in net.

“Our defense was really strong today,” Dieker said. “They’re our rock. If we can attack from the defense, that opens so many lanes for our offense to work off that.”

The defensive play is nothing new, as the Firebirds recorded their seventh shutout of the season.

“That unit has just been tremendous for us all year,” FSHS coach Kelly Barah said. “Olivia, Allix and Hanna have just been beautiful. It looks like offensively we’re better, but it’s because they’re so good defensively that it allows us to do some other things that we need to do.”

Free State junior Brooke Hayes stole the ball in the box from a Wichita South defender and sneaked a shot to the back of the net from about eight yards away, capping the Firebirds’ victory in the 72nd minute.

The Firebirds will play in the regional championship at Topeka Washburn Rural (15-2). The game is scheduled for 6 p.m. Thursday, but weather may force the game to Wednesday.