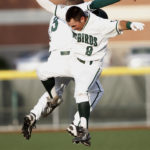 Free State junior Casey Hearnen, (3) left, and Cooper Karlin (9) celebrate after the Firebirds 3-2 win over Lawrence High school Wednesday at FSH. Hearnen drove in Karlin for the winning run in the bottom of the 8th-inning.

A walk-off single and victory on the mound were the last things Free State High junior Casey Hearnen expected to deliver while going through pregame for Wednesday night’s baseball City Showdown at FSHS.

“I was a little bit juiced at the beginning of the game,” Hearnen said moments after ripping a single to deep left that gave the Firebirds a 3-2, eight-inning victory over Lawrence High. “I was throwing some away in warm-ups. I was ready to go. This was my first varsity start against LHS, and it’ll definitely be in my memory for a while.”

Hearnen was at least partly responsible for two of the biggest moments of Wednesday’s game. In the top of the seventh, with Free State leading 2-0, Hearnen came in to relieve FSHS starter Parker Tietjen, who pitched lights-out for six innings but allowed two batters to reach base in the seventh, setting the stage for some momentary heroics from LHS junior Michael Sinks.

With runners at second and third and two outs, Sinks smashed a single through the left side on the first pitch he saw from Hearnen, and Brad Kincaid and Easton Barnes scored to tie the game at 2.

“We felt the whole game like we had a chance to win, which we did,” Sinks said.

Hearnen called the pitch to Sinks a mistake on his part and said he hoped to get a chance to make up for it as soon as he heard it hit the bat. After Free State’s Cooper Karlin singled and Jon Saathoff followed with a double in the bottom of the eighth, Hearnen stepped into the box against LHS starter Brandon Bell with a chance to end the game.

Bell got ahead early, but then left an 0-2 fastball in a spot Hearnen liked, and the junior third baseman got all of it, launching the pitch over the head of Barnes in left field for a walk-off RBI.

“I wanted it,” Hearnen said. “Earlier this year I had a couple of times in that same situation where it didn’t work out for me, so that’s just a great feeling, especially against LHS. That’s huge.”

While the late-inning drama stole the show, LHS coach Brad Stoll said he thought what unfolded earlier was the difference.

“They got two-out hits early in the game, and we didn’t,” Stoll said of RBI singles from Cameron Pope in the fourth and Tyler Walmsley in the sixth. “That’s what it boils down to.”

While both offenses came up with clutch at-bats, both starting pitchers were sharp throughout.

“I thought the Tietjen kid was pretty special,” Stoll said. “And our right-hander (Bell) pitched his butt off. You throw that well, you probably win most games. But you gotta give (Tietjen) a lot of credit.”

Wednesday marked just the sixth varsity appearance for Tietjen, a sophomore who has made five starts for the Firebirds (12-7) this season. So where did this one rank?

“This was the biggest one,” he said. “The whole thing was just amazing.”

Added FSHS coach Mike Hill: “A little on-the-job training. I was incredibly proud of the job that he did. The leadoff guy got on in the first four innings, and he just kept grinding through. He was terrific.”

Free State and Lawrence High (9-10) will meet again at 7 tonight at Kansas University’s Hoglund Ballpark in the regular-season finale for both teams.

“That’s how baseball’s meant to be played,” Sinks said. “And I’m glad we get to play it like that at the end of the season.”