Lions softball strings together hits in 13-3 rout of Firebirds 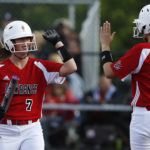 The Lions drilled 18 hits and strung together a few long innings in a 13-3 victory over Free State at LHS. The game ended in the sixth inning because of the 10-run mercy rule.

“It was really contagious,” said LHS senior Marly Carmona, who drove in a run after Gile’s single. “We knew we came out here ready to win. We haven’t played good against them in the past. We were ready.”

The offense kept rolling in the fifth inning when Gile hit a single to center to score Byrn, who reached on a leadoff single. Jolona Shield, who went 3-for-3 with three RBIs, drove in Gile with a single of her own.

Free State starter Meredith Morris didn’t have much margin for error against the Lions, and even when she threw a good pitch, the ball found a way to roll by or float over the Firebirds’ infield.

Byrn smashed a solo home run to center field in the sixth inning. Taylor then reached on an error and scored on a single from Kenzie Garvin to reach the 10-run rule. It was the Lions’ first win in the City Showdown since since May 17, 2011.

“Since Day One, I’ve put a lot of emphasis on hitting,” LHS coach Joe Dee Tarbutton said. “No matter what, if there are days we can’t do anything … we’re hitting the ball. It obviously makes everything a lot easier if we can get that going.”

LHS senior Andrea Mills gave the Lions a lead in the second inning with an RBI triple past a diving Remington Samuels in center field. Free State senior Courtney Elston scored on a wild pitch to tie the game in the top of the third before Lawrence scored three runs in the bottom half of the frame.

The Firebirds (10-9) cut their deficit in the fourth with two runs — Emily Byers and Morris — but struggled to do much else against LHS starter Megan Sumonja, putting only three runners on base in the last two innings.

“That’s kind of the way we’ve been this year offensively,” Firebirds coach Lee Ice said. “We can’t get a big hit with runners on first and second. We can’t string together a lot of hits and put together big crooked numbers. So if we don’t play defense and we don’t pitch extremely well, that’s been the outcome all season, just like that.”

LHS seniors were honored before the game, and they wanted to leave their mark against their crosstown rival.

“Honestly we were expecting to win, but we weren’t expecting to do that,” Carmona said. “But it’s a great feeling.”

The schools play each other again at 5 p.m. today at FSHS.