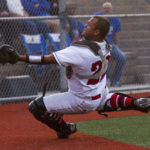 Lawrence High senior Drew Green has received plenty of accolades in his high school baseball career. The one he had really hoped for was a Div. I offer, and he picked up the only one he needed last weekend.

Green committed to play baseball at Northwestern State University of Louisiana next year. He visited the school and saw a game Friday with his dad and decided Saturday that it was the right fit.

“We had a blast out there, and everyone was so nice, and baseball is like their big sport down there,” Green said. “The coach was saying I could potentially come down there and play pretty quick, just depending on how hard I work. So that got me really excited.”

The 5-foot-10, 205-pound catcher earned Player of the Year honors from the Kansas Association of Baseball Coaches last year and has led the Lions this season with a .442 batting average and 15 RBIs.

However, baseball offers didn’t pour in after his junior season. Coaches told Green that he was being overlooked and he would eventually get an offer, but it’s not always easy to wait when the school year begins to wind down.

“I was definitely nervous,” Green said. “I didn’t know if I would end up going juco or something. With the draft coming up for MLB (in June), then that opens up more doors. I didn’t necessarily want to wait that long.”

Green had visited Baker University and Washburn University but held out the hope that Div. I schools would offer at some point.

“I was really thrilled when the recruiting coordinator called and said they were going to offer him,” LHS coach Brad Stoll said. “It was just really an exciting day for him because, he wasn’t really ever frustrated, but I just think as a teenage kid he was like, ‘Hey, man, when’s it going to come my way?’ There’s no doubt in our minds as a coaching staff that he’s a Div. I baseball player.”

The younger brother of Dorian Green, a LHS basketball star who went on to play at Colorado State, Drew Green has been the spirit of the Lions’ baseball team for the past few years.

“He’s the vocal leader because he never shuts his mouth,” Stoll joked. “He’s the leader of this team, and we’re excited to go into the postseason with a kid like that.”

Now Green can focus on trying to lead the Lions to the state tournament for the third time in his high school career.

“At the very beginning of the season, I knew I was pressuring myself,” Green said. “Coach Stoll was talking to me, ‘Be patient with it, relax’ and whatnot. The past few weeks, I’ve relaxed, and I feel great now just getting it off my back. Now I can just relax and just play the rest of my high school season.”