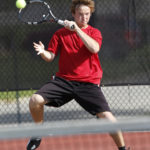 Lawrence High's Thomas Irick returns a shot during his regional championship Saturday, May 10, 2014, at the LHS courts.

Thomas Irick thought he was finished. The Lawrence High senior was tired, down a set and had already lost the first three games of the second set in the boys tennis regional championship Saturday afternoon at LHS.

But suddenly, something clicked.

After struggling with unforced errors, drilling shots into the net and wide of the lines, everything started to land for points. Irick won six straight games against Olathe Northwest junior Taylor Ficke to force a super tiebreaker.

Once again, Irick fell behind before finding his rhythm, dropping three of the first four points in the tiebreaker before scoring of nine of the next 12.

On match point, Irick smashed a fiery serve that went untouched for an ace, and he yelled “Come on!” while jumping in the air to celebrate his victory.

“It’s just bliss,” said Irick about the groove that helped him win his third regional title in four years. “The ball is slower. The lines are a mile wide. Everything is just easier.”

After the postmatch handshake with his opponent, Irick jumped into Lions’ coach Chris Marshall’s arms. Marshall told Irick after he fell into his three-game hole in the second set that if he wanted to make it easier for himself at state next weekend, “You better dig deep,” and Irick listened.

“(Coach Marshall) puts his heart and soul into the team, and it shows. He fights for us,” Irick said. “… He’s by far one of the biggest influences I’ve had throughout my high school career.”

As exciting as the championship comeback was, it might not have been Irick’s most intense match.

Irick left no doubt about the better player Saturday, as he fought through several deuces to win the first set, 6-4. He was pumping his fist after every point and uttered the occasional “Come on!” to himself to get fired up.

The second set was similar to the streak that carried Irick during the championship match, as he won 6-0. With Irick’s forehand and backhand equally strong, a frustrated Crick muttered under his breath, slammed his hat to the court and tossed his racket in the final set.

“I started picking up on a couple of weaknesses, and that started working out for me,” Irick added. “It’s focus. When you’re tired, you can do two things. You either die out, or you find that little spark that’s still deeper down. I found that (spark) in both matches today.”

Free State High’s top doubles pair, senior Stephen Anderson and junior Sam Solis, made it to the consolation semifinals and fell just short of a trip to the state tournament in a tiebreaker loss. Freshman Ian Pultz-Earle and junior David Neff also fell a win away from a state berth in singles after winning their first-round matches.

Solis was hit in the face with a ball, and it served as the turning point for the doubles pair who dropped the first set. After a long breather to make sure Solis’ nose was OK, the duo won the second set.

“We can be proud about how we performed today,” FSHS coach Oather Strawderman said. “I think we left everything out there on the court. Today just wasn’t our day.”