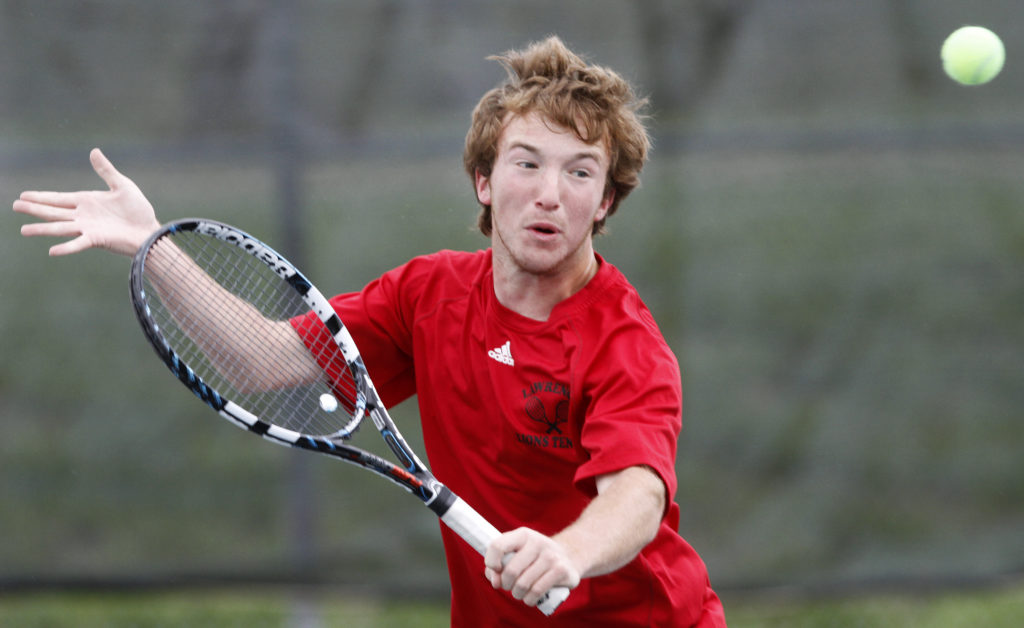 Lawrence High tennis player Thomas Irick will compete in some of his final high school matches at the Class 6A regional tournament today at LHS.

He doesn’t expect his father, Gary Irick, to be there.

Despite a close relationship between the two, it’s not uncommon for the elder Irick to stay away from his son’s matches.

“This will sound odd. Thomas and I have an arrangement,” Gary said. “I don’t watch him play matches anymore just because I don’t want to be the overbearing parent that is doing things a parent shouldn’t do on the side of a tennis court. I stopped watching him play matches probably six years ago, and other than a doubles match, I haven’t watched a single match since.”

Thomas enters regionals (9 a.m., LHS courts) after placing third at the Sunflower League and will try to advance to the 6A state tournament for the fourth straight year.

“I intend to do very well there (at regionals) and get as high of a seed for state as I possibly can,” Thomas said. “The week of the 16th, 17th and 18th, we’ve got state down in Wichita, and it’s going to be a lot of fun.”

Irick will play next year at Baker University.

“He’s just a really experienced tennis player,” Baker coach Joe Ahmadian said. “He started at a young age, and he’ll have a lot more matches under his belt most of my freshmen coming in. Obviously, he is a good athlete and has really strong ground strokes.”

Thomas has been familiar with Baker for years.

Gary Irick, a Baker business professor, was the head coach of the Wildcats’ tennis team from the spring of 1993 through 2002.

“I had a great group of student athletes that played tennis for me,” Gary said. “It was a great time. If I hadn’t had a child, Thomas, come along and require more of my time, I probably would have continued coaching.”

Gary had many fond memories of coaching at Baker, but none could compare to the 2001 season. The Wildcats won the Heart of America Athletic Conference for the first time in 10 years and qualified for the NAIA Tournament in Lexington, Ky.

While the Wildcats were consistently one of the top teams in the HAAC under the elder Irick, they shined even more in the regional and national spotlight when Gary’s father, James, was at the helm.

James is a member of the Baker and NAIA halls of fame due to his accomplishments as an athlete and coach at BU. The 1948 Baker alumnus played football and basketball for the Wildcats before serving in the military in World War II and then came back to compete on the tennis and baseball teams his junior and senior years.

After coming back to Baker in 1956, James served as one of the cornerstones of the athletic department until his death in 1993.

James led the football and men’s basketball programs in the early stages of his coaching career before focusing on the men’s tennis team starting in 1974. He turned the Baker tennis program into a national power, leading the Wildcats to 14 straight conference titles in a 15-year span from 1977 to 1991 and consistently placing at the NAIA Tournament.

One of the key members to James’ early success was Gary, who played for his father from 1976-1979.

“My dad ran a pretty tight ship, so we worked pretty hard at practice,” Gary said. “I remember matches where as a team we should have won that we didn’t win, and I remember how he handled that. Then I remember times where we won matches that we shouldn’t have won and celebrated those.”

James passed away before Thomas was born, but the family’s Baker connection played a key role in his college choice.

Lawrence High head coach Chris Marshall said that in order for Irick to reach his goal of a top-five finish at state, he must have a good mind-set throughout his matches.

“His biggest strengths are his confidence and his background,” Marshall said. “When he is on the court, he’s one of few players who is confident in his ability and is usually able to follow through.”

With the mental approach to the game and self-confidence flowing through the family tree, Gary is positive Thomas will perform well in his final matches as a Lion, even if he won’t witness them firsthand.

“I used to stand behind trees and watch from a distance, but that didn’t work, either. So I just plain gave it up,” Gary said with a laugh. “We both think it is the best for his tennis and our relationship.”

But with Gary’s office at Baker University’s Mabee Hall just a few hundred feet from the Wildcats’ tennis facility, will he be able to keep himself from watching Thomas for the next four years?

“I will probably go to the matches and watch doubles. I will probably slip away for the singles matches and let him handle the situation by himself,” Gary said. “But I’m more than pleased that he’s going to Baker. I think that Baker will be a great fit for Thomas, and he will be a good small-college tennis player.”