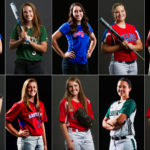 Player of the Year

Coach of the Year

Braun helped the Bears finish as Northeast Kansas League and regional champions to earn a trip to the Class 3A state tournament. Oskaloosa, led by Haidyn Bassett, Brianna Brooks, Madison Miller, Shyan Wright and Raegen Hamm, finished the spring with a 23-1 record.

Haidyn Bassett, Oskaloosa — Bassett earned first-team All-NEK League honors as a pitcher for the second straight year. She struck out 155 batters in 79 2/3 innings while only walking seven, and tossed six shutouts, including four no-hitters.

Brianna Brooks, Oskaloosa — Brooks hit .507 with 34 hits, 28 runs, 9 home runs and 37 RBIs this spring. The Bears catcher and third baseman called her own games behind the plate, and only allowed three stolen bases with her strong arm.

Morgan Byrn, Lawrence — A University of Missouri-Kansas City commit, Byrn topped the Sunflower League with 37 RBIs and was second with six triples. The Lions’ junior led the team with a .545 batting average, 42 hits and 4 home runs, while earning first-team All-Sunflower League and 6A All-State honors.

Shelby Dahl, Santa Fe Trail — Dahl was dominant in the pitcher’s circle and at the plate for the Chargers this spring. She owned a 2.38 ERA while striking out 89 batters, and also hit .597 with 3 home runs, 15 doubles and 25 RBIs, leading Santa Fe Trail to a 15-4 record and a spot in the 4A-II state tournament.

Moriah Kayhill, Wellsville — Kayhill started every game in her four-year career for the Eagles, and in her final prep season, she set a few single-season school records with 42 runs scored, 11 doubles and 4 home runs. The Independence C.C. signee has earned Pioneer League MVP honors for the past two seasons, helping Wellsville win back-to-back league titles.