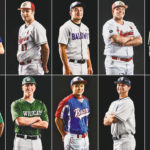 Player of the Year

Linquist was a major part of the Kaws’ run to the Class 4A-DII state championship game. He had a .493 batting average with 37 hits and 29 RBIs, and also was dominant on the mound, striking out 54 in 31 innings with a 2.56 ERA.

Coach of the Year

Brandon Bell, Lawrence — A first-team Sunflower League and 6A All-State selection, Bell was the ace on the mound for the Lions. The Washburn University signee finished third in the league in strikeouts and was among the leaders in ERA as he helped LHS reach a regional title game.

Chad Berg, Baldwin — Berg led the Frontier League with 31 hits and 32 runs scored this season, while batting .443. He also used his speed to steal 23 bases and earned first-team All-Frontier League and 4A All-State honors, helping the Bulldogs to a 13-6 record.

Drew Green, Lawrence — The Northwestern State University signee was one of the most feared sluggers in the Sunflower League, and was among the league leaders in on-base and slugging percentages with seven extra-base hits and plenty of walks as teams tried to avoid his powerful swing.

Casey Hearnen, Free State — Not only was Hearnen a force at the plate, batting .288 with 15 RBIs, but he was also a reliable closer for the Firebirds. The junior earned five saves this spring with a 2.03 ERA and 38 strikeouts compared to only 15 walks, leading Free State a regional title game.

Dylan Holden, De Soto — Holden stepped up for the Wildcats when they needed him the most. The Emporia State signee hit .645 with runners in scoring position, driving in 21 runners throughout the season. He was also battled through shoulder injuries throughout the season to strike out 25 in 16 innings pitched, and picking up three saves.

Shamus Kearney, Wellsville — Kearney set a new state record with a 0.41 ERA this season, striking out 81 batters in 51 innings. The left-hander only allowed 25 hits and three earned runs while sporting a perfect 10-0 record, helping Wellsville win a 3A state championship. He also led the Eagles in hits at the plate.

Zach Linquist, Perry-Lecompton — The Washburn University signee was diagnosed with leukemia in October and it didn’t stop him from dominating this year. He helped Perry-Lecompton win its second straight league title and was named the 4A-II Player of the Year by the Kansas Association of Baseball Coaches.

Bryce Stottlemire, Oskaloosa — One of the top hitters in the Northeast Kansas League this season, Stottlemire had a .524 batting average to go along with 25 RBI and 30 runs scored. The Ottawa University signee was equally as good on the mound, going 5-2 with a 2.77 ERA and 53 strikeouts to just 13 walks.

Travis Woods, Tonganoxie — Woods was the Chieftains’ ace on the mound, going 8-2 this spring with a 2.45 ERA and tossing five complete games, including a perfect game on April 15. At the plate, he hit .348 with 19 RBIs, helping Tonganoxie to its first state tournament appearance in 22 years.