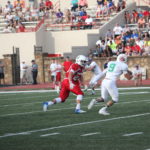 Pittsburg ? Former Free State High linebacker Keith Loneker has earned plenty of accolades over his prep career, but this time he was stunned.

Loneker knew he was playing well in the Shrine Bowl on Saturday at Pittsburg State University, but he was left near speechless when he was named the Most Valuable Player for the East squad at the end of the game.

Loneker finished with a game-high 10 tackles, including six solo tackles and two for a loss, as he teamed up with Lawrence High’s Kyle Wittman in the East’s 21-6 loss to the West.

“I didn’t think they’d give that to me, shoot,” Loneker deadpanned, before listing teammates who he thought also deserved the honor and the large trophy.

Loneker came up with big tackles throughout the night, including a stop at the line of scrimmage on a fourth-and-one, and a tackle near the goal line, which led to the East’s only touchdown on the following possession.

“I felt personally, our defense for how much we were on the field, we came out and played,” Loneker said. “I couldn’t tell who was making the tackles. I was just playing my game and happened to make some tackles.”

His performance was no surprise to his teammates and coaches after watching him practice all week. Loneker was named the defensive captain for the East Friday.

“Oh my gosh, MVP — that’s really all you can say about that kid,” said Mike Gillman, a Free State assistant coach who was also an assistant on the East team. “The kid flies around, he was voted (captain) by the team because he’s such an athlete, and the kids love him by the way he plays. You saw it tonight, he’s just an animal.”

LHS alum Wittman played both center and guard for the East’s offense, which struggled to convert on third downs. Yet, Wittman was strong in pass protection, helping the East’s three quarterbacks sit in the pocket before their throws.

“It was different playing a game in July,” Wittman said. “It was real fun. We came out good the first half … second half they stepped up. It was a tough game. They are a really good team, but overall, it just felt great to get out here and play again.”

Not only was it a joy for all of the players to be a part of the Shrine Bowl, but the coaches cherished it as well.

“It’s amazing. It’s the pinnacle of my career to coach in game at this level and have this much talent surrounding me, from both sides of the state,” Gillman said. “It’s a lot of fun.”

Though fans only saw all of the players during the game, Wittman said the practices are what he’s going to take away the most from these past two weeks.

“Our offensive line coach coached us as college offensive linemen, not high school,” said Wittman, who will join Loneker at Baker University this fall. “We got to work on a lot more technical things and stuff like that, and that’s going to help me going into Baker because a lot of the stuff is very similar.”