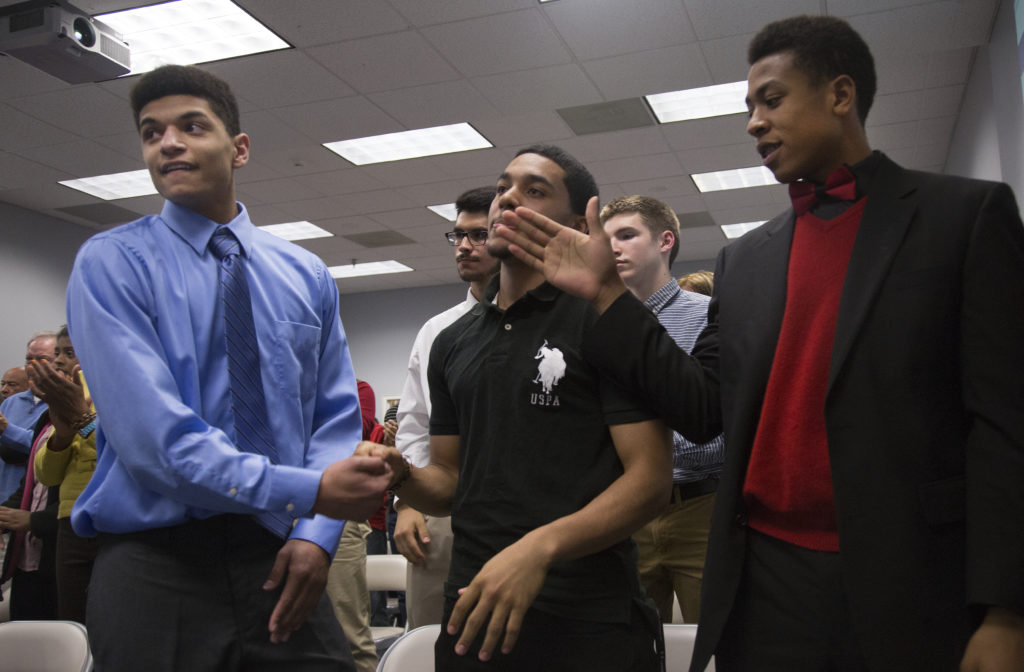 Lawrence High boys basketball players Justin Roberts, middle, and John Barbee, right, congratulate teammate Anthony Bonner, left, after Bonner’s speech before the Lawrence school board on Monday, April 28, 2014. Members of the Lions team and their families were among hundreds who showed up to support LHS coach Mike Lewis, who was fired last week. 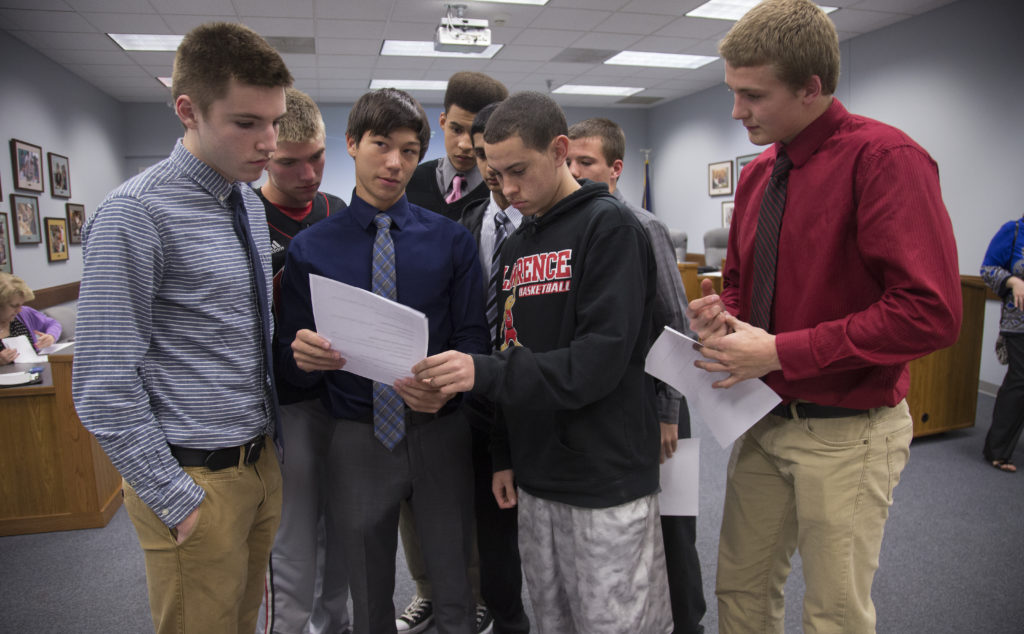 As impressive as they were on the basketball court this past season, the Lawrence High Lions trumped themselves Monday night in the public school administration building, where the weekly school-board meeting took place.

One by one, they took to the microphone and so respectfully went to bat for their fired coach, Mike Lewis. After the portion of the meeting that addressed the coach’s unpopular firing concluded, one by one, the players shook each board members’ hand.

They spoke from the heart, expressing intelligent thoughts in an intelligent manner. No whining. No demands. No fear that they were overstepping their bounds as teenagers. Serious display of maturity.

They wanted to let the school board know that a desire for a “new direction” creates more questions than it answers.

“Four years ago, this program had a 4-17 record,” Ben Rajewski said, sounding more like a seasoned attorney than a junior in high school. “From there, the record has continually improved. Two 12-win seasons capped off by this year’s 17-win season. If that does not constitute movement in the right direction, I’m not sure what does.”

The crowd applauded him as if he had just nailed a game-winning three-pointing, mixing in hoots and hollers.

Freshman Jackson Mallory attended the meeting in his baseball uniform, having left the game before it ended to show support for his basketball coach.

His mother, former LHS girls basketball coach Kristin Mallory, spoke as a parent and a friend of the fired coach who retains his job as a teacher at Southwest Middle School. Some employees of a school district might have bitten their tongues for fear of weakening their job security. Fear is not in this woman’s vocabulary.

“The administrators that were responsible for his dismissal are not answering questions, nor are they willing to schedule a meeting with us parents,” Kristin Mallory said. “I’m outraged that a school I have coached for, given my heart and soul for for eight years, one that I have since trusted with the development of my own son would be so callous.”

Andy Vigna, speaking on behalf of Langston Hughes school parents in the crowd who know Lewis through his youth coaching, used strong language in urging the school board to investigate what happened that triggered the firing.

“I ask for the future of our school district to go in the right direction, I ask the school board to please, please consider an investigation, a re-evaluation of what actually went on.”

Then Vigna uttered two sentences that stole the night: “I’m sure there are three people who know the truth. It shouldn’t be too hard to find the truth.”

He was talking about principal Matt Brungardt, athletic director Bill DeWitt and Lewis.