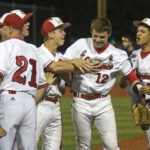 Lawrence High senior Kieran Severa (12) is greeted by teammates after coming off the field following a catch in which he hit the center field wall hard during LHS' game against Blue Valley West on day three of the River City Baseball Festival, Saturday at Hoglund Ballpark.

LHS right-hander Brandon Bell was causing the same frustration for the Jaguars. Bell was tossing in the mid-80s and his slider was cutting around swings to keep hitters off balance. He struck out nine over 5 1/3 innings, giving up one earned run on six hits.

It was an old-fashioned pitcher’s duel and it was going to come down to timely hits and strong defense. The Lions couldn’t come up with either in a 5-1 loss, but ultimately it was a play that didn’t factor into the outcome that everybody was talking about afterward.

Blue Valley West scored two runs in the fifth inning with help from two LHS errors. In the sixth, with reliever Michael Sinks pitching, the Jaguars added runs on a bad throw to the plate with the infield drawn in and a bases-loaded walk.

Now with the Jaguars on the verge of breaking the game open, Blue Valley West catcher Tanner Gragg, a KU signee, scorched a pitch to the deepest part of the ballpark. That’s when Lions center fielder Kieran Severa gave chase.

“I thought that ball was a home run,” Severa said. “I saw it was hit hard so I just turned and ran.”

Blue Valley West’s fans began cheering as the ball neared the 400-foot marker in deep center field. Even if the ball didn’t clear the fence for a grand slam, it was sure to clear the bases and score three runs.

“When I looked back up, I thought I might have had a chance on it,” Severa said. He was approaching the ball on the warning track and never heard left fielder Alex Smith-Gauna give him any warning that he was close to the wall. The ball landed in his glove as his body slammed in the wall.

Then Severa turned ­– his cap no longer on his head after ramming his chiseled 6-foot-1, 200-pound frame into the hard padding — and raised the ball with his right hand.

“The catch that Kieran Severa had might be one of the finest catches I’ve seen in a high school game ever,” LHS coach Brad Stoll said. “That was unbelievable. That’s just a selfless, relentless pursuit to that ball and he put his body in the way of harm.”

All of the Lions players met Severa on the field by the first base line and he received a standing ovation from all of the fans in attendance.

“That’s awesome,” Severa said. “That’s what you play for. It’s an amazing feeling. The adrenaline kept me from feeling any pain which is awesome. I’ll probably feel that when I wake up tomorrow.”

Severa scored the lone run for the Lions in the first inning. He drew a walk, stole second and moved around the bases to score on two wild pitches. The Lions only managed two hits in the game — singles from Sinks and Jacob Seratte — and struck out 12 times, including five times looking at the third strike.

“Probably the best offspeed we’ve seen this year as in his curveball,” Severa said of Engelken, a University of Nebraska signee. “His curveball was very sharp and very hard to pickup. That killed us.”

The Lions (6-7) dropped all three games at the River City Baseball Festival, but Stoll said his team was better for playing top competition.