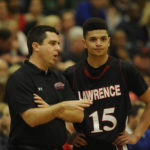 Friday night as a college student. In so many ways, life doesn’t get much better than that. But on this past Friday night, University of Arkansas freshman Jake Mosiman just wasn’t in the mood for socializing.

“It’s terrible that he’s gone,” said Mosiman, a former Lawrence High basketball star, about the firing of LHS boys coach Mike Lewis. “I hate it. I’ve been in a bad mood since I heard the news.”

Mosiman said he couldn’t name a single player that he knows of who played for Lewis who doesn’t feel the same way he does about the man.

“He just knows how to treat players and he has respect for everybody,” Mosiman said. “I’ve never seen him yell at someone when they don’t need to be yelled at like most coaches do. Just out of the blue a new A.D. comes in, fires a coach who was 17-5 — a well-liked guy — and then says there’s no story, nothing to talk about? This isn’t the NBA. Even if it were the NBA, jeez, 17-5 is pretty good.”

Mosiman said he’ll be back home in a couple of weeks and plans to stop by his alma mater to ask questions of the administration about the firing.

“Coach Lewis means a lot to me,” Mosiman said. “And his whole family revolves around LHS basketball. How could you take that away from them? Their children made a video announcing all the players’ names, and they just love LHS basketball. Mike Lewis’ mom loves it.”

Mosiman kept his basketball chops in shape as a practice player used by the Arkansas women’s basketball team. Most Div. I schools, including Kansas University, invite some of the more talented male basketball players at the school to participate in practices. Mosiman followed the exciting LHS season via the web and through communicating with former teammates.

His heart was broken when the Lions lost assistant coach Kermit Aldridge to cancer on the season’s final day. Sharing tears with the players in the locker room, it was Lewis who broke the news of Aldridge’s death to them.

“Wasn’t that enough for one season,” Mosiman said, “a coach who everybody really, really liked dying?”

Even for teenage athletes, who tend to show remarkable resilience, Aldridge’s death shook the Lions deeply. He was such a positive influence, such a friendly face, a players’ coach.

Obviously, a coach losing his job can’t compare in any way to one losing his life, but they are shaken by this loss as well. They might never understand the firing, but they’ll compete hard and unselfishly for the next guy, honoring a pair of coaches who had a hand in teaching them how to do so.