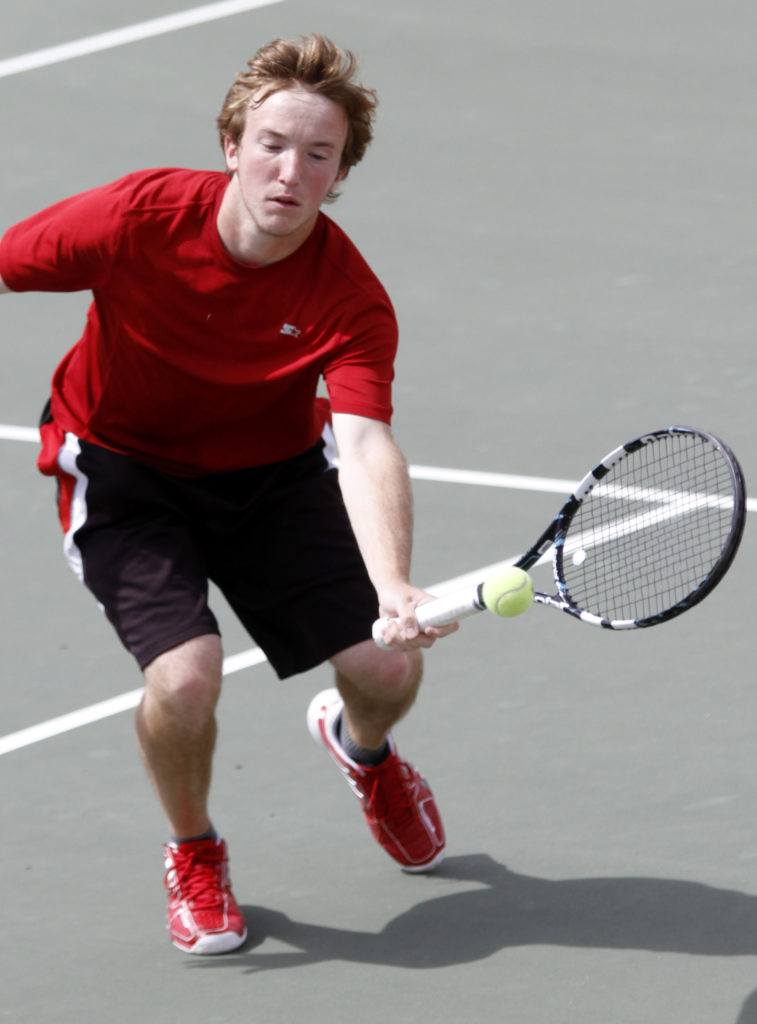 Lawrence High's Thomas Irick plays a ball near the net during an LHSl tennis Invitational Friday at LHS. 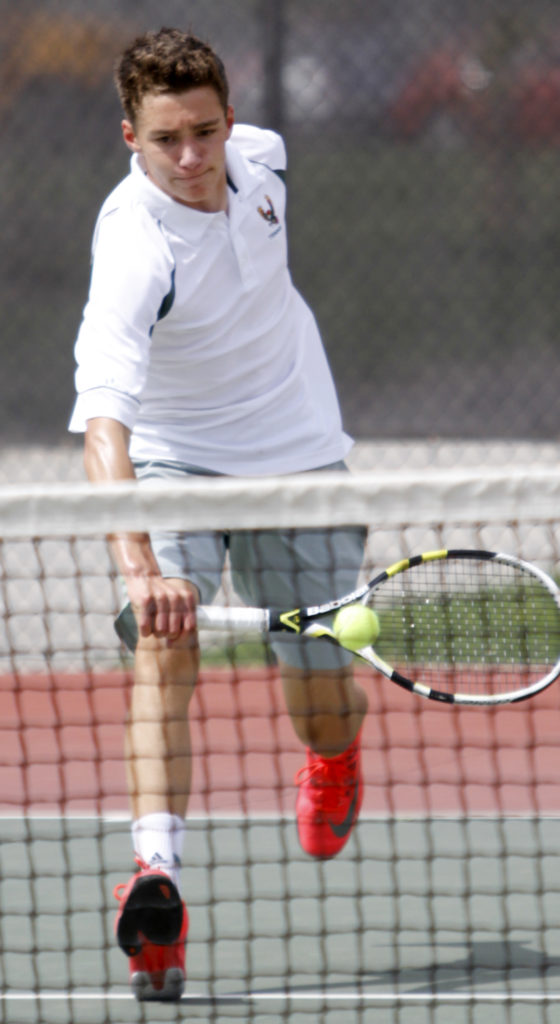 An unscheduled, somewhat surprising city showdown broke out during the final round of Friday’s Lawrence Invitational tennis tournament at LHS, where Shawnee Mission East won the team title and Free State and Lawrence High finished third and sixth, respectively.

“We had an unplanned dual with Lawrence High there at the end,” Free State coach Oather Strawderman said. “That was a pretty cool.”

Friday’s tournament featured the top two singles players and top two doubles teams from each school, and the squads were split into different pools. The teams then played out head-to-head matches in pool play and, at each spot, faced the player or doubles team that finished with the same record in pool play in the cross-bracketing portion of the final round for first, third and fifth place.

In all four cases, Lions and Firebirds squared off against one another at the end, with Free State winning three of the four clashes. Earlier this month, Free State topped LHS, 6-3, in the official City Showdown dual.

Lawrence’s Thomas Irick was the lone Lion to prevail in the final round, where he knocked off Free State’s Ian Pultz-Earle, 8-3.

Irick dropped his opening match to Olathe Northwest’s Taylor Fickey, a player he has beaten in the past but could not solve Friday, and responded to the loss by winning his next two matches by the combined score of 16-3 to place third.

“What’s good is he didn’t play a good first match but was able to correct things and came back and played two nice matches to finish the day,” LHS coach Chris Marshall said of his top singles player.

“Our singles were the highlight of our day for sure,” Strawderman said.

In the doubles portion of the tournament, LHS and FSHS faced off for fifth place in both finals, with Free State’s Stephen Anderson and Sam Solis upending Lawrence’s Panyin Boye-Doe and Adam Eudaly, 8-6, at No. 1 and Jackson Schneider and Seamus Ryan toppling the Lions’ Matt Braman and Johnathon Kinder, 8-5.

Braman, a freshman, was playing just his third varsity match of the season.

“The good thing now is he has that experience,” Marshall said. “And he’s also done enough to letter, which is cool, too.”

Friday’s action unfolded on a warm and calm afternoon and finished faster than most expected. In all, 28 matches featured winning scores of 8-3 or better and just three of the 24 pool-play tilts were closer than that, including Irick’s 8-6 loss to Fickey in the first match of the day.

With the Sunflower League meet and regionals looming, both coaches viewed Friday as a great way to gear up for some intense tennis in the near future.

“It was a good day,” Strawderman said. “Going 3-1 against Lawrence High is always good, not just because of the crosstown rival thing, but because they’re a league team and a regional team.”

Added Marshall, whose squad has played a lot of duals lately: “It’s good to get us back into a tournament format. It’s getting down to crunch time.”