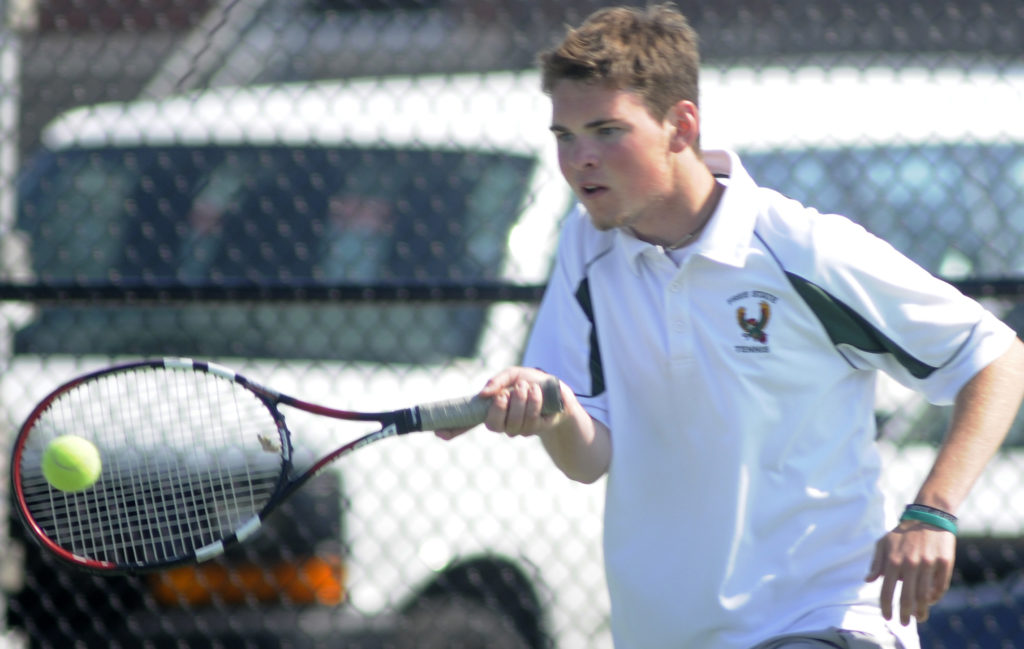 Free State tennis player Stephen Anderson returns a volley during his No. 2 doubles tennis match against Lawrence High in the City Showdown on Tuesday, April 15, 2014, at FSHS.

Lawrence High tennis player Thomas Irick serves during his No. 1 doubles tennis match against Free State in the City Showdown on Tuesday, April 15, 2014, at FSHS.

Free State High junior Sam Solis was locked in a back-and-forth tennis match against Lawrence High senior Panyin Boye-Doe on Tuesday afternoon at FSHS. The Firebirds had already clinched the dual victory, but sometimes there’s more on the line in the City Showdown.

His serve broken, then faced with double match point, Solis fought back to win in a tiebreaker, helping add to the Firebirds’ 6-3 victory. Free State has never lost a City Showdown dual, winning all 17 meetings over Lawrence High.

Boye-Doe, a first-year varsity player who has a long frame but is still raw in some of the technical parts of the game, traded leads throughout the match with Solis, one of the biggest, most powerful players at the dual. Their match outlasted the rest, so players from both teams watched as Solis won four straight points after Boye-Doe reached match point. Solis then took the tiebreaker by avoiding double faults, which plagued him earlier.

“It’s difficult,” Solis said. “I just knew I had to keep my head straight.”

FSHS coach Oather Strawderman added: “Sam is one of those guys on the team that is kind of a rock and kind of an anchor for us. A quiet and reserved fella, but, man, he just played amazing there at the end and pulled it out for us, which is great.”

The Firebirds also picked up singles victories from David Neff, Seamus Ryan and Tucker Nickel. Ryan, who picked up a win in No. 3 doubles alongside Nickel, jumped to an early lead in No. 5 singles over the Lions’ Matt Carmody, and cruised to a 9-4 victory.

In No. 2 singles, LHS sophomore Elliott Abromeit battled to a 9-7 win over Free State senior Stephen Anderson. Abromeit, who has a knack for flicking balls over his opponent’s head right in front of the back line, was caught being too passive at times, which led to Anderson scoring strong forehanded winners.

“When (Abromeit) is moving his feet and hitting the ball at the proper contact spot, he can be a very good player,” LHS coach Chris Marshall said. “The problem is sometimes he stops moving his feet or tries to do something too much and that’s when we start having problems.”

Lions senior Thomas Irick used his veteran skills to put away freshman Ian Pultz-Earle in No. 1 singles, 9-0, and team with Boye-Doe to win at No. 1 doubles, 9-5.

“Thomas is fabulous and just played super well today,” Strawderman said. “It’s good for our kids to see some of these seniors on Lawrence High and see where we need to focus on, and where we need to work towards.”

Marshall said the dual is more like a “fancy practice,” because it’s not the format that will be used at regionals, but he was happy with his team’s performance.

“To me, we split,” Marshall said. “My two singles players won the big matches that we needed to win, so I’m very proud of that. I’m hoping our doubles players learned something. As long as we can learn from this, then it’s a positive any way you look at it.”

The Firebirds will play host to Wasburn Rural at 3:30 p.m. today. The Lions return to action in the Topeka West quad at 8 a.m. Tuesday.