KU students, staff sound off on possibility of concealed carry of guns in campus buildings 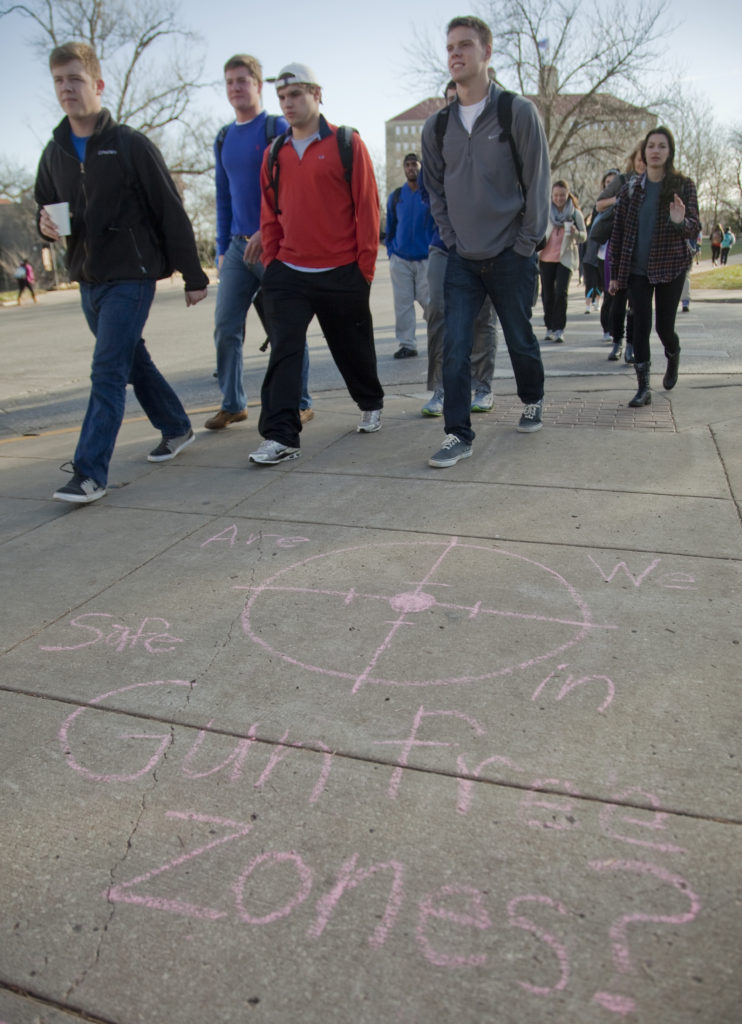 Kansas University students pass by one of several chalk messages on campus Tuesday addressing the issue of allowing concealed carry permit holders to have guns on campus. The messages and a forum were organized by the KU Chapter of Young Americans for Liberty, whose members wore empty holsters Tuesday to protest the ban of guns on campus.

For Kansas University student MaryRose Scarpelli, the question of whether people with concealed carry permits should be allowed to take guns into campus buildings isn’t black and white.

“I see the appeal, and I do believe in our right to bear arms,” said Scarpelli, a junior from Overland Park. “But I also would feel a little uncomfortable with someone sitting next to me with a gun in a holster in my archeology class.”

On the hill, comfort level varies when it comes to concealed weapons in university buildings. As university officials plan for a new law that will allow them, students and faculty members have strong views, falling on both sides of the debate.

In April, Gov. Sam Brownback signed into law a measure authorizing those who get licenses to carry concealed weapons into any state or municipal building except those that have “adequate security measures” such as metal detectors or trained guards.

Universities have been granted a four-year exemption. The Kansas Board of Regents has directed universities to conduct building-by-building assessments to address the impact of allowing concealed carry, a process expected to take the better part of a year.

“As the Regents have requested, we are analyzing the impact of the legislation and how we can best meet its requirements,” she said.

Students such as Chris Rice, an Overland Park junior, see a conundrum.

Rice didn’t like what he saw when he envisioned more than 1,000 students trying to file through a metal detector to get into a lecture class at Budig Hall. At the same time, he’s not OK with the thought of a fellow student in that lecture carrying a gun.

“I just think that would completely alter the learning environment,” he said. “I don’t see either as a really good option.”

The cost to install security in all university buildings would surely be too high to be feasible, so in a way it seems KU is being forced to allow concealed weapons, Ottawa junior Ally Bittner said.

“I think that the state has kind of put the university in an impossible place here,” she said.

Mikkelson, a professor of Russian, East European and Eurasian studies, said he personally thinks adding security would be worth it to keep guns out of campus buildings but acknowledged it could be an astronomical task.

“It’s a real bind the university is in,” he said.

On Tuesday, campus-goers may have noticed a handful of people wearing empty gun holsters.

Those were members of the KU Chapter of Young Americans for Liberty, and they believe concealed carry should be allowed everywhere.

September’s Navy Yard shooting in Washington, D.C., and an ensuing tweet from KU journalism professor David Guth inspired Tuesday’s Empty Holster Protest, said Jacob Fox, the chapter vice president and a KU senior from Landenberg, Penn. Guth attracted national attention — and condemnation — when he posted this to Twitter after the Navy shooting: “The blood is on the hands of the #NRA. Next time, let it be YOUR sons and daughters. Shame on you. May God damn you.”

“I don’t think anyone can argue the fact that America has a problem with these atrocities,” he said. “And as individuals we have the right to protect ourselves.”

Fox said he does not have a concealed carry permit and does not own a handgun. But he said his organization is passionate about second amendment rights, an issue that falls under their mission of “spreading liberty.”

The Young Americans for Liberty KU Chapter’s membership includes a number of non-KU students, including 19-year-old Kendon Brawner of Lawrence, who coordinated the protest.

Brawner — who also does not have a permit but hopes to get one when he’s old enough — highlighted another argument for allowing concealed carry. Training and education is required to get a permit.

“There’s multiple layers of security,” Brawner said. “These people know how to use their weapons. They’ve got a lot of rules to follow when doing this.”

‘I would be terrified’

“I would be terrified,” Carothers said. “We have so many young people here who are under so many different kinds of pressure and who are in transitional, sometimes unstable, periods in their lives that the potential for danger is radical.”

The resolution says concealed carry poses a threat to students and a distraction to the learning environment and that university and city police should be the primary decision-makers in a time of distress, said student body president Marcus Tetwiler, a Paola senior.

Tetwiler said Student Senate had not yet discussed new developments but that he hopes leaders will prioritize students’ opinions as they decide how to proceed.

“We as a body felt very strongly that this resolution was a progressive step to be used by our university administration as an example of what students think is right,” Tetwiler said. “I hope that the student voice is the one that holds the most weight because it’s our fears, it’s our opinions, that really matter in terms of safety in the classroom.”