Some parents and school administrators say the cross-town rivalry between Lawrence and Free State high schools may have crossed the line last week when a number of Free State students showed up at the showdown football game wearing T-shirts referring to Lawrence High students as “peasants.”

But so far, school and district officials have not indicated they intend to take disciplinary action over the shirts or impose any new policies regarding T-shirt propriety.

“I would not let my own child buy that shirt or wear one to school,” Free State Principal Ed West said.

Gary Anderson, the parent of a Lawrence High student, said he was greatly offended when he saw the shirts at the game.

“I think it’s just horrible that they were allowed to wear them,” he said.

The incident may have caused more hurt feelings among parents and faculty than it did among students. Some Lawrence High students and parents acknowledged that their fans wore some offensive T-shirts as well.

But the reference to LHS students as “peasants” appears to have struck a chord among some in the community who say there is a growing perception that the schools are separated by a large divide in economic class.

“LHS students had T-shirts showing a lion eating a firebird,” Anderson said. “But ‘peasants’ – you’re insulting parents, you’re insulting the students, alumni … That T-shirt was over the line.”

According to state demographic data, about 41 percent of Lawrence High students are considered economically disadvantaged, meaning they qualify for free or reduced-price meals. That compares to about 26 percent of Free State students.

The higher rate at Lawrence High is largely due to the fact that most of the city’s subsidized housing for low-income families is located in the LHS attendance area. However, officials note that both high schools have large numbers of families in which the parents are university professors, graduate students or other kinds of professionals. 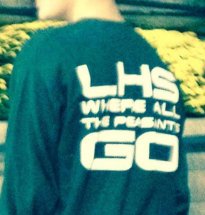 West said Free State had no role in producing or distributing the shirts. According to several people who spoke to the Journal-World, the shirts were produced by a Free State student who promoted them on social media and sold them out of the back of his car.

The green, long-sleeve shirts had the words “Free State Firebirds” on the front, beneath the image of a crown, which reportedly referred to the “royalty” theme that Free State students had adopted for the game. The back of the shirts read, “LHS Where All the Peasants Go.”

“The tee shirts created and worn by a small number of students during last week’s football game were in poor taste and do not represent the views of Lawrence Free State High School,” Doll said in an email to the Journal-World. “Students from both high schools use poor judgment at times in advancing an intracity rivalry. Both schools strive to use these occasions as learning experiences for our students.”