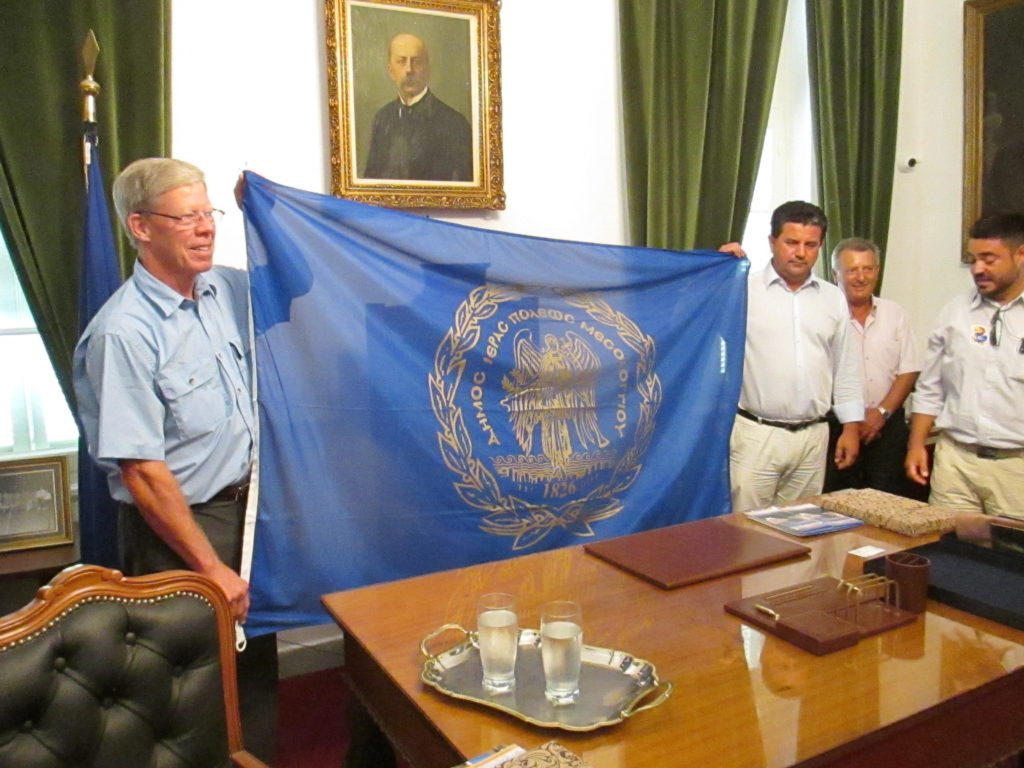 Lawrence Mayor Bob Schumm, left, receives the official flag of the Municipality of Messolonghi, Greece, from Mayor Panagioeis Kaesoulis, holding flag at right. With them are other members of the Sister City delegation to Iniades, Greece. Messolonghi is responsible for the administration of the area of Iniades.

Lawrence officials and residents visited the Greek costal city of Iniades during the last week of July, not necessarily to take a summer vacation, but to make inroads for the future.

Iniades joined Eutin, Germany, and Hiratsuka, Japan, as a Lawrence sister city in 2009. Lawrence Mayor Bob Schumm and a group of 13 others visited the Greek city, meeting with officials and educators and staying with local families. Schumm said the trip strengthened the relationship between Lawrence and Iniades and could make the exchange of students and residents a future possibility.

“It’s good to understand that the world is much bigger than just Lawrence,” he said.

Don Schawang, head of school for Bishop Seabury Academy, went on the trip and was excited about the possibility of exchanging students with Iniades.

“I have always thought international experience was important to education,” he said. “When it comes to my students, it’s about opening their eyes to the world.”

Kansas University theater students have been visiting the city every two years to perform in one of the city’s ancient amphitheaters.

Schumm said Iniades originally sought to make Lawrence a sister city because of this exchange. Schumm added that Iniades and neighboring Messolonghi city officials suggested an exchange program between KU and a technical college located within Messolonghi.

A group of 20 officials and residents will travel to Lawrence next spring to try to work out a deal with KU. They will also try to coordinate the beginning of a Messolonghi festival in early May. The city hopes to send over 10 Greek dancers to help kick off the festival in Lawrence.

“It could be an interesting event,” Schumm said.

Mayor Bob Schumm and Don Schawang both said they paid their own way to Greece and were responsible for most of the trip’s costs. The Sister Cities program costs the city $7,500 a year, Schumm said. Most of the money is spent on transporting visiting officials and on gifts given during visits.

“It’s a very low-cost operation,” Schumm said. “We get a lot of bang for the buck.”