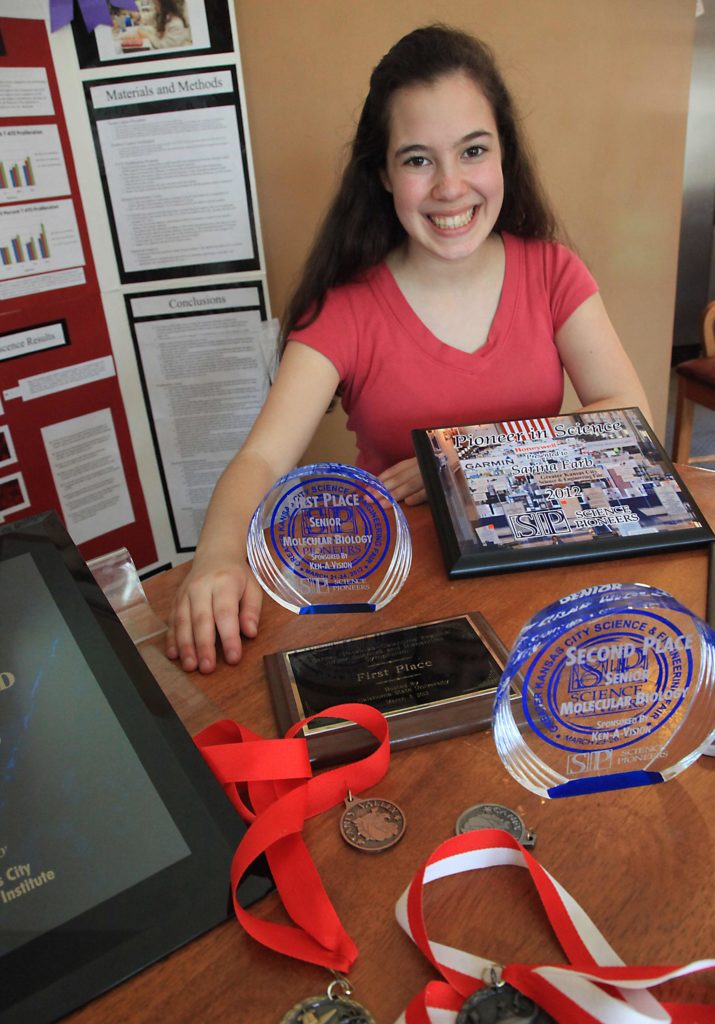 Sarina Farb, 18, a home-schooled senior who also takes classes at Free State High School, has been competing in science fairs for the past eight years. Over spring break, she earned the grand prize at the Greater Kansas City Science and Engineering Fair for a study in which she examined the effects of BPS, or bisphenol S.

Sarina Farb, a home-schooled high school senior who also takes classes at Free State High School, wasn’t caught up with March Madness or the Jayhawks’ run to the Final Four during spring break.

Instead, she was busy winning the grand prize at the Greater Kansas City Science and Engineering Fair for her study, “A Comparison of the Endocrine Disrupting Potential Exhibited by Environmentally Relevant Doses of Bisphenol A and Bisphenol S in Vitro T-47D Breast Cancer Cells.”

It’s an idea a couple years in the making for Farb, who graciously accepts the label of “science geek.”

It stemmed partly from her mother, JoAnn, constantly insisting that Farb look for BPA-free water bottles, as well as Farb’s interest in breast cancer. The “BPA” stands for bisphenol A and is believed by scientists to be harmful for humans, though it’s found in a wide variety of consumer products, such as water bottles and food packaging. Some health advocates have urged for the removal of BPA from such products.

Farb noticed that the Lawrence Public Library and The Merc promote BPA-free receipts, as BPA is used in the ink and found on the surface of receipts. Studies have suggested that the BPA found on receipts is absorbed into the body when handled.

So instead, the receipts at The Merc and the library contain BPS, or bisphenol S, which is similar to BPA. However, very few studies have examined whether BPS is any safer than BPA. So Farb set off to find out.

Farb talked her way into a lab at Kansas University, and with the assistance of Kristi Neufeld, a molecular biology professor, obtained some lab space and the necessary testing supplies.

Farb spent “hundreds of hours” over the past year testing whether BPA and BPS cause an increase in the growth of breast cancer cells.

“BPS is worse,” said Farb, as her results showed that BPS caused more growth in the breast cancer cells than BPA.

It’s an ambitious research start for Farb, who will attend Grinnell College in Iowa in the fall and study molecular biology.

Her love of science was instilled in her at an early age by her mom, who took her to a science fair when Farb was in second grade.

“I thought it was cool,” said Farb, who was hooked on science from then on. She said she was driven to “do a better project” than the ones she saw at various fairs.

For the past eight years, Farb has been competing in science fairs but had never won the Greater Kansas City Science and Engineering Fair until last week. As part of her win, she’ll get an all-expense-paid trip to Pittsburgh in May to compete in an international competition. She’ll also head to Washington, D.C., in May for her win at another science fair earlier this year in Oklahoma.

Farb said she’s not sure where her science and research will take her from here on out.

She has yet to tell the folks at the library and The Merc about her discovery but reluctantly plans to.

“My goal is to bring awareness to the issue,” she said.