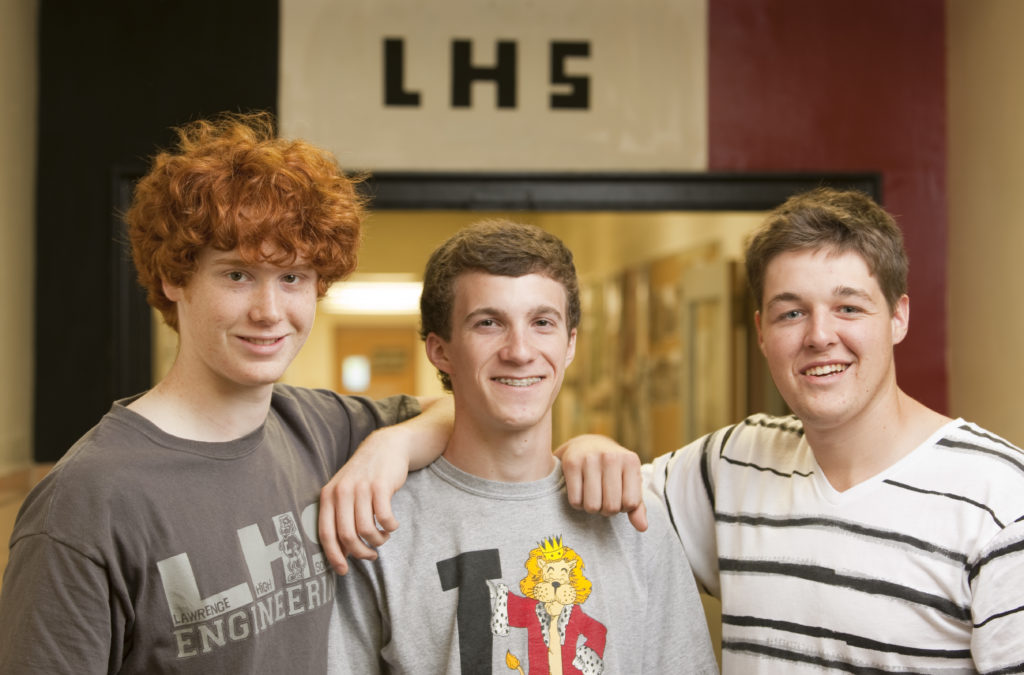 Soon-to-be Lawrence High graduates Matt Zabel, Stephen Bell and Collin Belcher have been classmates since they were junior high students at Southwest. All three plan to pursue degrees in mechanical engineering at Kansas University in the fall.

And Matt Zabel? He and Stephen spent part of last summer assembling a T-shirt cannon with a CO2 cartridge, barrel of PVC pipe and $18 sprinkler solenoid valve from Home Depot.

Not a bad foundation for the future.

The graduating seniors at Lawrence High School are building their college and career plans upon the educational experiences and projects they’ve long embraced at school: taking drafting and architecture and engineering classes, competing in the National Construction Challenge in Las Vegas, and using plastic film, carbon fiber, hot adhesive and Super Glue to build model airplanes to be flown in and around the West Gym.

Now that they’re topping out their high school careers together — graduating at 1 p.m. today at the Lions’ football stadium — the longtime friends already are drawing up plans for their next project. All three will enroll this fall at Kansas University, and all are set to follow the same course of study: mechanical engineering.

“They’ve been leaders in the classroom, and it’s really exciting to see their brains — and their gears inside their brains — just going a million miles an hour and trying to solve a problem,” says Charlie Lauts, the industrial arts teacher who has guided them through engineering-minded courses at LHS and, yes, led them to Vegas. “They’ve been very successful in class, and I believe when they get up to KU that success is just going to carry them through. …

“When they start applying for jobs, everybody’s going to want those three.”

But let’s not get ahead of ourselves. Even these guys admit there’s still plenty of growing up to do.

While calculus and physics and all their other classes at LHS have been worthwhile, it’s been their time in Room 115 that’s proven to be the most useful — and fun.

Face it: These guys probably would have been designing buildings, making planes and assembling robots at home if they couldn’t do so at school.

“To have one class out of the day to mess around and just build stuff is pretty awesome,” Matt says. “In this class, it’s pretty much everybody doesn’t grow up. It’s just normal kid stuff.”

The three friends have been working together on such projects for years, even before they knew the work would help shape their futures. Collin and Stephen met in fourth grade, and all three became something of a team when they arrived on campus for seventh grade at Southwest Junior High School.

The Lawrence High experience simply strengthened their bonds, ones sure to continue even with the three taking somewhat different paths to the same place: Collin will join a fraternity, while Matt will live in Lewis Hall and Stephen will be up the street in Templin.

“It’s awesome to know that we will have people next year to bank on if we need help,” Collin says. “You’ve got guys you’ve known your whole life, and you know how they work — especially with engineering, you’ve got to be able to work together. That’s a big thing.”

Today’s graduation is just the next step.