Parents consider contracting school buses with their own money 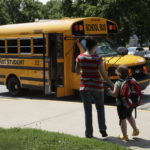 A group of parents have proposed privately contracting a bus from First Student Inc. to make up for routes lost when the Lawrence school district cut its transportation budget.

Two years after the Lawrence school district put a stop to extended bus service by slashing its transportation budget, some parents hope to bring the familiar yellow buses back to their neighborhoods.

With their own money.

At least two elementaries — Schwegler and Sunflower — are poised to have bus rides available for students living within 2.5 miles of the schools, through private contracts arranged and paid for through PTAs or parent groups.

Linda Howard hopes to sign up 100 students from Southwest Middle School and Quail Run School, where families could pay $3.45 or less each day to have a student ride to class and back home again.

Hiring a bus, Howard said, would ensure that students who wouldn’t otherwise qualify for district-provided transportation could get to school without having to walk up to 2.5 miles each way or steer their parents or guardians into driving them.

Her two sons used to walk each day to nearby Quail Run, but the idea of having them walk nearly two miles each way to and from Southwest — crossing Clinton Parkway twice — just doesn’t sit well.

“I can drive my kids,” said Howard, who said she used to pay the district $280 a year to transport her daughter to Southwest, back when the district provided pay-to-ride service. “I can carpool with someone, but it’s just easier and will help more people out there if there’s a bus.”

School district officials would rather provide the service, but budget challenges have limited what the district can and will provide, said Rick Gammill, district director for special operations, safety and transportation.

The district limits its transportation to what it can receive state reimbursement for:

In the past, students also could ride the bus if they lived anywhere from 1.5 miles to 2.5 miles away, through the district’s pay-to-ride program. District fees started at $100 per semester, per student.

Ending the pay-to-ride program saved the district $500,000 a year, because fees never came close to covering the district’s costs. While some families paid fees many more rode for free, having qualified for waivers with their placement in the district’s free-and-reduced-lunch program.

“It’s a service we no longer offer, but we have no problem if the neighborhood associations want to look into it — and if they can afford it,” Gammill said. “That’s the big key.”

Schwegler led the way in 2009 with its PTA contracting with First Student Inc. to provide a bus for students living south of 23rd Street, south of Clinton Parkway and west of Iowa. Safety and convenience were the goals.

First Student charges the PTA $20 a day for the bus, or about $1,800 a semester. To break even, Schwegler needs 18 students and started last year with 25 — a total climbed to 38, giving the PTA extra revenue to channel into resources for teachers.

“Parents are glad for the opportunity to be able to pay for this service, and the school is grateful that this service is provided,” said Erika Dvorske, who organized the bus service on behalf of the PTA and is president of the United Way of Douglas County. “It’s been successful.”

Schwegler and Sunflower share two built-in advantages that Southwest does have: a late start to the day and a relatively late closing bell. The late schedules allow First Student to serve them by extending the runs of other buses that already are on the road, having gone to and from schools with earlier schedules.

Hiring a bus to handle one school costs the district $188 a day. Adding a second school to that bus route adds less than $20 to the bill.

Howard, the parent who spent six years on the Quail Run’s PTO, has done the math. Southwest starts early — just after 8 a.m. — and that means she’d need 50 students from that school to make the service affordable, at about $70 per student per month.

Adding another 50 students from Quail Run — using the same bus, because Quail Run starts at 8:45 a.m. — would lower the cost to riders from both schools to about $40 per month, she said.

Howard has heard from families of only about two dozen students looking for bus rides, about a dozen from each school. She plans to let First Student know by July 6 whether she’d be arranging to hire a bus for the coming year.

Anyone interested in the potential service may call Linda Howard at (785) 640-8977 or send her an email at kyiaks@aol.com.

“I’ve heard so many complaints from people saying they would do it,” said Howard, who remains convinced that there are enough parents out there to make the system work. “But I haven’t gotten enough response yet. If it doesn’t work, it doesn’t work.”