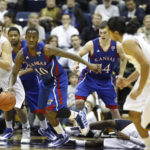 Kansas guard Tyshawn Taylor comes away with a steal against Cal during the second half, Wednesday, Dec. 22, 2010 at Haas Pavilion in Berkeley, California.

Something so startling happened Friday afternoon that I marked down the date, Jan. 14, 2011, and the time, 3:17 p.m. For the first time in 51 years, somebody changed my mind.

That somebody was basketball buff Dr. Artie Shaw, a retired psychologist who lives on a 120-acre farm on the border of Leavenworth and Douglas counties.

The topic of discussion: Kansas University junior guard Tyshawn Taylor’s defensive ability. Taylor’s one of the quickest college basketball players in the nation, longer than most point guards, and appears to have good stamina, three terrific components for any defender.

Yet, I maintained, he’ll never become a consistently stellar defender because he’s not blessed with the ability to focus for long stretches of time, such as the entire shot clock, for example.

You either have a brain that lends itself to sharp focus or you don’t, and there isn’t much you can do to change it. Not so fast, said the good doctor who moved in 1952 from Brooklyn, N.Y., to Lawrence to study for his master’s and doctorate degrees.

Simply because he has two more degrees than I do doesn’t make him right and me wrong, I thought, and dug in for what I was sure would be another victory, of which there are many because I get to decide who wins.

“That’s a learned skill, in my opinion,” Shaw said. “It’s easier for some than for others, but a lot of it is discovering what you have to concentrate on. Everyone uses the word focus now. I always used concentrate. It seems to me it’s something we can learn and we use it in things we care about and don’t use it in others.”

Shaw is more than a basketball enthusiast. He said he has visited 379 national-park sites.

“I have an interesting memory for things I care about, things in history and sports,” Shaw said. “If you ask me who acted in a given movie, I don’t remember until someone reminds me.”

That’s when, without trying, he changed my mind, made me realize there is hope for Taylor developing into a consistent defensive stopper. Taylor cares about winning. What he needs to care about daily in practice is concentrating on doing the right things with his feet, his crouch, his hands and his determination to adhere religiously to the scouting report. He cares deeply about all those things and he’ll keep his man from getting past him. He does that and winning will take care of itself.

“I really believe in his quickness, his anticipation and his toughness, in a lot of ways, that I thought he could be a lock-down defender for us, maybe as good a college guard defender as there was, and he hasn’t gotten to that point yet,” KU coach Bill Self said. “Hopefully, he will. He’s played really well at times and he’s been inconsistent at times, but I really think that that’s one area where inconsistency shouldn’t happen because you can control that night in and night out.”

How can he control it? By making it a priority, one possession at a time, by taking great pride in his ability to prevent the other team from getting into its offense.

When Taylor plays like that, the opposition gets pushed to its heels, begins to self-destruct and watches Kansas put on a show at the other end.